Kakeru Ozora is a character who first appeared in a short story that appeared in the manga called The Lover of Princess Kaguya. The story was later adapted into the movie, where he makes his only anime appearance.

Kakeru Ozora appears only in the Sailor Moon S movie. He first appears in the beginning, looking through his telescope. He sees a meteorite crash to the Earth, and goes to where it landed to find a small crystal.

Later, Luna is walking and a car almost hits her. Kakeru jumps in front of the car, grabs her, and moves out of the way just in time to save her. He takes her back to his apartment, feeds her, and cares for her. She pretends to be a normal cat who doesn't speak, and helps Kakeru guess her name. She soon falls in love with her rescuer. At Kakeru's apartment, we first meet Himeko Nayotake, Kakeru's girlfriend. She is a famous astronaut chosen to go on the Luna Frontier Project, who maintains very realistic views and is unable to accept Kakeru's theory of a princess on the moon named Princess Kaguya. She tells him that he would have been an excellent astronaut, if only he could give up his fantasies. After she leaves, he confides in Luna that it has been his lifelong dream to be an astronaut.

Luna returns to Usagi's house, where the two discover that Princess Snow Kaguya is continuing to freeze the Earth. In order to complete her plan, she needs the missing piece of crystal which Kakeru found. She goes to his apartment and retrieves it while he is sleeping, but the crystal has become attached to his life force. It will continue to drain his energy until he dies. Luna is in love with Kakeru, though she knows that he is in love with Himeko instead of her. Still, she resolves to save him from the evil ice princess.

After Princess Snow Kaguya is destroyed with the power of the ginzuishou, Super Sailor Moon prays that the power of the Imperium Silver Crystal can be used to grant Luna her wish of becoming human. Meanwhile, Luna follows Kakeru into the snow, where he collapses. Suddenly, the light of the Silver Crystal surrounds her and transforms her into a human. Kakeru awakens, believing that she is his Princess Kaguya. Luna, pretending to be his fantasy princess, takes him into space to see the sunrise and the moon's beauty. He soon realizes that she is the cat that he adopted, and she tells him that he must recover in order to await his true Princess on Earth. She kisses him, and they return to Earth. Later, when Himeko returns, Kakeru greets her at the airport with roses.

Kakeru appears only in Volume 11, in the "Lover of Princess Kaguya" special. He first appears catching a crystal, a piece of a comet, that has fallen to the Earth from the sky. Later, he rescues Luna from being hit by a car, and takes her back to his laboratory. Afterward, she falls in love with him and visits him often, accepting gifts such as a ribbon and candy.

He is a genius scientist. He has loved astronomy since he was a child, and even designed a rocket at the age of twelve. He has degrees in space aviation, engineering, chemistry, physics, biology, and medicine; but he was not selected to be an astronaut, much to everyone's surprise. He nevers tries again to become an astronaut, rather, he joins a space development team. His childhood friend, Himeko, believes that he has given up his dream to become an astronaut, but in actuality, he suffers from a heart condition which prevents him from reaching his goal.

Kakeru discovers a comet which is heading for the Earth, and he names it "Princess Kaguya," after the woman whom he believes lives on the moon. The crystal he finds in the beginning is a piece of this comet, and he has placed it inside a petri dish. The comet disappears (other scientists speculate that it burned up in the sun), but the piece of comet he saved grows larger and larger while Kakeru becomes sicker and sicker. Eventually, he collapses and it is discovered that he has a heart condition that prevents him from becoming an astronaut. As the crystal grows, a figure appears inside of it - Princess Snow Kaguya (taking her name from the comet that Kakeru named). Kakeru lies in a hospital bed, ill, and Princess Kaguya comes through the window at the hospital, but Luna sees him and calls out for Usagi. Usagi arrives and transforms into Sailor Moon, but Princess Kaguya retreats upon seeing her. Usagi and Luna tell Himeko of the situation. As time goes by, Kakeru becomes more and more interested in keeping the comet shard near him. Himeko sees his obsession, and breaks the crystal on the floor. Princess Kaguya is angry that her body (within the crystal) has been broken, and she sends Snow Dancers all over the Earth, freezing it over.

Super Sailor Moon defeats Princess Kaguya, and when she dies, Kakeru's heart finally stops. Chibiusa's asks that Super Sailor Moon use the power of the Holy Grail to make Luna human. She does so, and goes to Kakeru's side. She tells him that she is Princess Kaguya, and takes him into a vision of space. She tells him that he must live in order to wait for his real Princess Kaguya (Himeko) to return to Earth, and that he will go to the moon with Himeko and watch the beautiful dawn together with her. Just as he realizes that it is Luna, she kisses him on the lips. In the hospital, his heart starts again and he wakes up, realizing that he must wait for his Princess Kaguya. As he awakens, Himeko thinks about him and we see that she is pregnant with Kakeru's child. 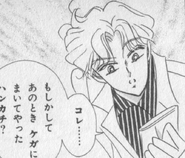 Retrieved from "https://sailormoon.fandom.com/wiki/Kakeru_Ohzora?oldid=231400"
Community content is available under CC-BY-SA unless otherwise noted.