JunJun is one of the Amazoness Quartet who serves Zirconia and Queen Nehellenia. She is also the member of the Sailor Quartet as Sailor Juno.

The name Juno can have its roots in multiple Latin words, such as diove (love) or iuvenis (youth). But all these words and meanings link the name to the Roman goddess of marriage and birth.

Sailor Juno's name comes from one of the larger main-belt asteroids, Juno, the third asteroid discovered, and along with Ceres, Vesta, and Pallas. It was considered to be an actual planet up until 1845.

JunJun has green hair, green eyes, and dark skin. Her hair is divided into three sections by brown braids. She wears a brown and green bikini top and white baggy trousers with a green and brown panel. Her sandals are green and she has golden bracelets and hoop earrings. On her top and panel are three dark-colored shapes that look like phases of the moon.

In the Materials Collection, she is said to have the darkest skin of the Amazoness Quartet.

Sailor Juno had what was easily the most complicated hairstyle—along with the most complicated hair accessory—out of all her sisters. She had green hair with three circular brown hair bands resting on top of her head, which extended up to three longer hair bands, all connected to a green oblong piece, that resembled a circle with a crescent-shaped bite taken out of it, containing her green locks into a very high ponytail. Trailing down from the headdress, were two long brown hair bands—each ending with a piece identical to the one atop her headdress—that contained the rest of her hair into two low ponytails. Her sailor uniform consisted of a white leotard with a brown chest bow and a green star-shaped brooch affixed to it. Her stripe-less sailor collar was green, her choker was green, her earrings were gold tear-drop shaped hoops, and her tiara was gold with a green star. She had white bubble-like sleeves with a double row of white trim and white bicep-length gloves with green padding. Her skirt was green with a white bow that had a slight sheen of green at the back, and her footwear consisted of white knee-high boots with green inverted triangular arches with yellow stars.

She was a member of Amazoness Quartet, who was the Sailor Quartet, who intended to protect Chibiusa in the future when Crystal Tokyo was in power. They were still sleeping when Queen Nehellenia senses their power and used her dark power to corrupt the four Sailor Guardians, and they became the Amazoness Quartet. After they were destroyed, Sailor Saturn saved them (and their orbs) when the Dead Moon Circus was crumbling. Later, she asked Neo-Queen Serenity to revive them using the power of the Silver Crystal. They returned to their Sailor Guardian forms, and went back into sleeping, waiting for the time where they would be able to protect Chibiusa.

JunJun, now Sailor Juno, along with the rest of the Sailor Quartet, helps Eternal Sailor Chibi Moon fight in the Stars arc.

Like the other members of the Quartet, JunJun owned an Amazon Stone, and hers was colored green.

JunJun artwork from the Materials Collection 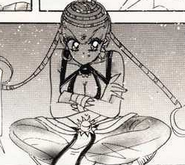 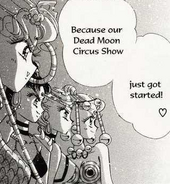 Sailor Juno from the Dream arc

Sailor Juno from the Stars arc 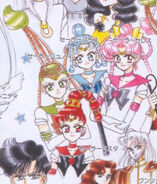