Jadeite was the first of the four Shitennou from the Dark Kingdom. It is later revealed that he was a general of Prince Endymion.

Jadeite has very short, closely cropped hair, and is the only member of the Shitennou who can boast this trait. It is colored as a very pale blonde and is parted off to the right-hand side of his head. His eye color is grey. Outside of his disguises, he is typically seen wearing his Shitennou uniform. His accent color is red.

Jadeite is the first of the Dark Kingdom's Shitennou to appear in the manga. He appears in Act 1 but is not named until Act 2, when he calls himself the commander of the Far East.

His first plot is to have a youma pose as Naru Osaka's mother at the Jewelry OSA-P store selling jewelry which drains its wearers of their energy. When this first plot fails, he moves on to his second plot, where he sets up a cram school attended by Ami Mizuno called Crystal Seminar, where students are drained of their energy.

After this, too, fails, his final plot, in Act 3, is to trap the senshi on a bus. He kidnaps students riding the 6:00 bus (#666, a reference to the devil) from Sendai Hill, which is near the Hikawa Shrine. He manages to hypnotize Rei into boarding the bus, and takes the bus to another dimension. Sailor Moon and Sailor Mercury confront him, Sailor Moon uses her Moon Frisbee to prevent him from moving. He can still, however, use powers stemming from his vision, and attacked both senshi. Sailor Mercury prompted Luna to throw the transformation pen towards Rei, where she transformed immediately and became Sailor Mars and attacks him with her anti-evil scrolls, in which Jadeite was killed.

His skeleton was preserved in a glass coffin and Nephrite vows to bring him back to life, which Jadeite temporarily does when Princess Serenity is found. Unfortunately, he and the other Shitennou were immediately turned into precious stones afterwards.

In the later side story Casablanca Memory, Zoisite also tried and failed to avenge Jadeite's death.

Later, when the Silver Crystal appeared, it was revealed that during the Silver Millennium, Jadeite and the other Shitennou originally were not evil - they served under Prince Endymion as his guardians and advisors. They were, however, tempted by the power of the Dark Kingdom (like most other humans), and fell to it. They eventually become good again, and their spirits advise Mamoru when he needs their help.

Art of Jadeite from the Materials Collection 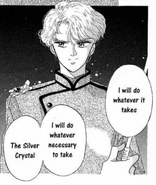 Jadeite's first appearance in the manga 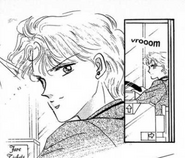 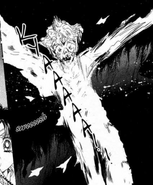 Jadeite's death
Add a photo to this gallery
Dark Kingdom
Retrieved from "https://sailormoon.fandom.com/wiki/Jadeite_(manga)?oldid=240265"
Community content is available under CC-BY-SA unless otherwise noted.