Jadeite is one of the Shitennou.

His appearance in the musicals was all similar to his appearance in the 90s anime and the manga. Just like the manga and anime, he had blond hair and donned a gray uniform and white gloves. The trim of his uniform was almost always red, though in some musicals, it was purple. The uniform also had epaulets on it, though in "Pretty Soldier Sailor Moon ~ Spin-off – The Dark Kingdom Resurrection Chapter", the uniform had no epaulets on it at all. Additionally, his hairstyle seemed to vary a bit in the musicals.

In this musical, the Shitennou played high school boys assigned to romance certain Sailor Senshi. Jadeite was paired up with Rei Hino, as the musicals tended to take the famous manga illustration as canon.

For this musical, Jadeite, the other Shitennou, and Queen Beryl were all revived by Sailor Galaxia as part of her plan to obtain the Sailor Senshi's Star Seeds. Once again, the character was paired with Rei Hino. The uniforms were made of a shiny royal blue material, with the front flaps open all the time like Kunzite's in the anime. The trim and flap on Jadeite's uniform was a metallic purple, and he had epaulets.

The Advent of Princess Kakyuu - The Second Stage Final -

Although Jadeite was not present in this musical, the character Kalunite was visually similar to the previous musical's Jadeite and could easily be believed to be him. 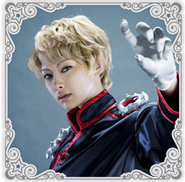