Ishtar is a character exclusive to the video game Sailor Moon: Another Story.

In Sumerian culture, Ishtar was associated with the planet Venus. She was the goddess of love and was most closely comparable to the Greek goddess Aphrodite, who was known as Venus to the Romans.

She is the Oppositio counterpart of Sailor Venus. Named after the Babylonian fertility goddess, Ishtar is not particularly smart, nor powerful, and was recruited only because she followed Nabu, but considers herself Shaman Apsu's favorite and fights solely to win her approval. 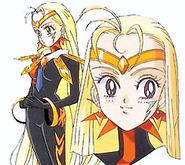