8-9 (after re-awakening in Sailor Stars)

Kaolinite, hurting her closest friends and loved ones

Who is the True Messiah? Chaos of Light and Darkness (debut)

Hotaru Tomoe (土萠 ほたる, Tomoe Hotaru) is the civilian identity present-day incarnation of Sailor Saturn (セーラーサターン, Seeraa Sataan). After the defeat of the Death Busters and Pharaoh 90, she was reborn as a baby and taken in by her fellow Outer Sailor Guardians, later aging up to a young child and re-awakening as the Guardian of Destruction.

Hotaru mainly appears to have a black shoulder-length bob with purple shine on front and purple eyes. In her initial appearance, she was usually seen in her casual attire or sometimes wore a winter jacket, while in Mistress 9's control.

Like both Haruka and Michiru, who disguised themselves as students in Mugen Academy, Hotaru wears the standard Mugen Academy winter school uniform, as she wears blue stockings and black flats.

As Sailor Saturn, she retains her civilian appearance, but also wears a gold tiara on her forehead with a white gem on front. Like the other Outer Sailor Senshi, her dominant color is purple (sailor uniform, choker, linings of her gloves and skirt) as the sleeves of her leotard resemble flower petals, and wears matching purple knee-length heeled boots with white laces. Her front and back bow is either dark brown in her anime official art or black at the near end of the anime's 3rd season both her silver star brooch and the star gem on front of her choker resemble the pure heart crystals being recently hunted by the Death Busters and wore a matching silver planetary dangling earrings on both of her ears as her main earrings closely resemble the planet Saturn. She also wields the Silence Glaive while in this form.

Sailor Saturn serves as the main spirit, which is manifested within Hotaru as she battles in control against the spirit of Mistress 9.

In her Super Sailor Senshi form, her appearance is like the rest of the Super Sailor Senshi and her dominant color is now indigo after being reborn, her uniform has a single white line on each side and her dark brown/black bow at the back was lengthened and the gem at the center of her bow is replaced with a purple heart-shaped brooch and her choker has a gold star shape at the center of her choker.

Hotaru is the only child and daughter of Professor Souichi Tomoe. During her childhood, Hotaru was involved in a freak accident in her father's genetic engineering laboratory. Germatoid, a Daimon from the Tau Star System, used an experimental space created by Professor Souichi Tomoe to cross over to Earth. His arrival caused a tremendous explosion that left Hotaru dead and her father injured. The sinister entity promised to restore Hotaru to life if the professor agreed to his terms. The distraught professor agreed immediately, at which point Germatoid hijacked his body, while Hotaru's body was possessed by a second entity, Mistress 9. While Germatoid's personality completely overwhelmed that of Souichi Tomoe, Mistress 9 remained largely dormant in the resurrected Hotaru, only surfacing occasionally. Hotaru tried to return to a normal life, but, largely due to Mistress 9's presence, she had become very frail and prone to mysterious seizures. She also possessed unique abilities that allowed her to heal minor injuries in seconds. Meanwhile, her possessed father set about establishing the Death Busters and arranges Pharaoh 90's passage to Earth, quite unbeknownst to Hotaru.

Due to her strange abilities and inexplicable mood swings, Hotaru was ostracised by her classmates and lived a largely solitary life.

Chibiusa loses her hat at the park and runs to retrieve it, where she first meets Hotaru. She and Hotaru become best friends. However, Hotaru suffers from fits obtained from a lab accident years ago, so she sometimes collapses in pain.

During a few Daimon attacks, Hotaru started showing she had powers, as she was able to unconsciously damage a few Daimon that crossed her path during her fits. It was these instances that caught the attention of the Outer Sailor Senshi (Uranus, Neptune, and Pluto). They started to realize that she could be the Messiah of Silence. Sailor Pluto revealed that Hotaru was the reincarnated Sailor Saturn, and feared that if Saturn awakened, she would end the world.

Once her identity as Saturn was confirmed during a Daimon attack, the Death Busters hid her away in Mugen Academy to keep the Outer Sailor Senshi from killing her. They were convinced that if she was not killed by the time of the next eclipse, she would destroy the world. Hotaru's body was under the control of the Messiah of Silence, passing orders to Professor Tomoe.

Chibiusa was eventually captured by the Death Busters and the Messiah of Silence consumed Chibiusa's Pure Heart Crystal, changing her form into Mistress 9. While possessing Hotaru's body, Mistress 9 struggled to keep control as Hotaru continued to fight for control. After Mistress 9 opened the way for Pharaoh 90, Hotaru was finally able to regain control and destroy Mistress 9, reawakening as Sailor Saturn.

After Sailor Saturn was willing to give her life to destroy Pharaoh 90 and save the world, Sailor Moon was able to use her Pure Heart to enter the core to save Hotaru. Pharaoh 90 was destroyed and Sailor Moon survived, holding an infant Hotaru in her arms. Sailor Uranus and Neptune took Hotaru and gave her to Souichi Tomoe (who was no longer possessed by Germatoid) to raise her again.

In the 5th and final season, infant Hotaru is still living with her father and has a vision of Neo-Queen Serenity and Eternal Sailor Moon in front of a vast full moon. Soon, Setsuna comes over to take Hotaru back with her, as she will be needed for the battles ahead. Professor Tomoe gives baby Hotaru to her, which implies that he had gotten his memory back and knows her destiny as a Sailor Guardian.

As Super Sailor Saturn, Hotaru is very determined when it comes to her mission and her duty as a Super Sailor Guardian, and her personality is very different from her human identity as Hotaru Tomoe, as she partially possessed and influenced by the spirit of Sailor Saturn herself.

Hotaru is absent for a majority of the Sailor Stars episodes but appears during all of the Nehellenia arc episodes and only the very end episodes of the main arc. Despite being seen alone, she did not transform into Super Sailor Saturn on-screen via Crystal Power.

Sailor Pluto returned with baby Hotaru and was upgraded to Crystal Power along with Sailor Uranus and Sailor Neptune. Shortly through the season, Sailor Pluto was killed by Sailor Galaxia, who took her Star Seed alongside Sailor Saturn.

She, along with all the other Super Sailor Senshi, was revived by Princess Serenity after she had turned Galaxia back into her normal self by expelling Chaos out of her body entirely. She praised Serenity for cleansing Galaxia and defeating Chaos. She watched as Serenity was happily reunited with Mamoru (who bore the attire of Prince Endymion) and the departure of Chibi Chibi.

Sailor Saturn has powers related to death and destruction, silence and ruin themselves. She can easily obliterate entire planets and reduce them and their inhabitants to complete oblivion. If she used her full strength, she would be able to bring ruin to entire worlds.

She can also erect force-fields around herself and others that can withstand, even Galaxia's strongest attacks.

Hotaru in her introduction

Hotaru's outfit from when she first met Usagi

Hotaru's outfit while at the botanical garden 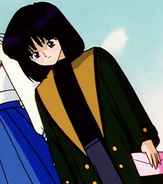 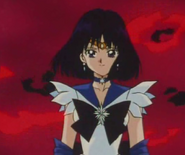 A flashback of Hotaru in her civilian form as a little girl.

The spirit of Sailor Saturn meets the reborn Hotaru