The "Holy Grail" is an object of great power used by Super Sailor Moon. Resembling an elaborate cup or goblet, it appears in the manga, the third season of the 90s anime, and in Sailor Moon Crystal. By calling out Crisis Make-up! (Super Moon Crisis Power and Moon Crisis Power in the Cloverway English dub), the Grail enables her to temporarily transform into Super Sailor Moon, a much stronger and more powerful evolution of her third regular Sailor form. The Grail also greatly increases the powers of the Spiral Heart Moon Rod, allowing it to perform the attack Rainbow Moon Heartache.

When Chibiusa was talking about what to make for her art class, she mentioned a weapon that her mother once had that gave her power; a picture of it was in Neo Queen Serenity's room in the future. When Cyprine and Ptilol attacked the Senshi, they used their powers to manipulate the Senshi's suspicion of one another to attack each other. Sailor Moon merged her powers with Sailor Chibi Moon and Tuxedo Mask and the grail was formed, breaking the mind control.

The four Inner Senshi then poured their planet powers into the Grail, and the Outer Sailor Guardians poured the power of their talismans into it. Sailor Moon drank from the grail and evolved into Super Sailor Moon and used her much stronger Rainbow Moon Heartache attack, destroying Cyprine and Ptilol. She would use the grail again to fight Germatoid, and then against Mistress 9 and Pharaoh 90, with Sailor Chibi Moon gaining a grail of her own and transforming into Super Sailor Chibi Moon. After the Outer Sailor Senshi left following the defeat of Pharaoh 90, the Holy Grails lost their divine powers and vanished, due to the Outer Sailor Senshi being unable to contribute their planetary powers for the Super transformation.

Appeared when then three mystical talismans; the Space Sword, the Deep Aqua Mirror, and the Garnet Orb were reunited. The three items started to float, forming and was formed in the center.

It allowed Sailor Moon to evolve into a much more powerful form, becoming Super Sailor Moon. To do so, she had to first transform into the third evolution of her regular Sailor Moon form and then lift, along with the phrase Crisis, Make Up. Every time she needed to transform, the cup magically materialized in her hands, but she could summon the grail at will and not necessarily to fight.

Episode 125 marked the last appearance of the Grail in the series, when Mistress 9 had used it to summon Pharaoh 90 to Earth (right after she had tricked Sailor Moon into handing it over willingly), who had absorbed it into himself, causing the Grail to shatter.

The actual Holy Grail first appears in "Transformation: Super Sailor Moon" and gives Sailor Moon the ability to evolve into Super Sailor Moon, with even greater powers of the Moon. Like the original anime, the Grail greatly amplifies the healing abilities of the Spiral Heart Moon Rod and enables Super Sailor Moon to exterminate her opponent with a much stronger attack: Rainbow Moon Heartache.

An additional, smaller Holy Grail appears for Sailor Chibi Moon alone in "Upper Atmosphere". After using it to transform into a secondary evolution, Super Sailor Chibi Moon, she then combined her new Super Sailor abilities with those of Super Sailor Moon and performed the combo attack, Rainbow Double Moon Heartache, which is tens of times stronger and more effective than Moon Spiral Heart Attack.

In "Infinite Judge", Super Sailor Moon called on the Grail so that she could release all of its sacred power, along with those of the Silver Crystal, at Pharaoh 90 to destroy him for good.

A similar item is present in the video game Sailor Moon: Another Story. Both Sailor Moon and Sailor Chibi Moon have one and those items' purposes are the same as their manga counterparts: evolve the two Sailor Soldiers into their Super forms.

The Super upgrade grants them with an increase in their statistics, heals them up to 999 hp and the ability to perform Rainbow Moon Heartache (Sailor Moon only), Pink Sugar Heartache (Chibi Moon only) and Rainbow Double Moon Heartache (a link attack). However, they lose all her normal forms' attacks and cannot use any other link technique which involves other Sailor Soldiers.

Sailor Moon, Sailor Chibi Moon and Tuxedo Mask summoning the Holy Grail in the manga for the first time.
Add a photo to this gallery 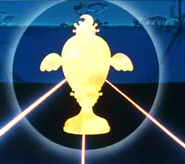 The grail being formed in the anime

Sailor Moon summoning the Holy grail.
7.jpg
Add a photo to this gallery

Sailor Moon drinks from the grail

Retrieved from "https://sailormoon.fandom.com/wiki/Holy_Grail?oldid=231661"
Community content is available under CC-BY-SA unless otherwise noted.