Start a Wiki
"Protected by Uranus, The Outer Planet of Wind, Guardian of the Heavens. I am Sailor Uranus."
— Sailor Uranus' Stock introduction

Haruka: Even though her name is written in hiragana and in not inherent, Haruka (遥か) means "distant".

Haruka is an older teenage girl with short, pale blond hair and dark blue eyes. She is the tallest Sailor Guardian, as she stands at about 180 cm or 5 feet 11 inches.

Haruka is shown wearing both feminine and masculine clothing. When she wears masculine clothes, her appearance is rendered sharper to help make the distinction. However, she is often mistaken to be a male.

Her dominant color was navy blue (tiara gem, her collar, choker, gloves, back waist bow, and skirt) and her accent color was yellow (front bow). She wore on both earlobes each a golden hoop, her collar had no stripes, her choker had no gems attached to it, her shoulder pads were normal, her gloves were wrist-length, and her long, knee-high, high-heeled boots are navy blue. In the manga, her brooch changed from a circle to a heart when Sailor Moon first transformed into Super Sailor Moon.

She gained a second gold hoop earring, her choker had a star attached to it, her collar had one white stripe, the center of her front bow became a heart, she had one translucent shoulder pad, and the back waist bow was enlarged and lengthened. The length of her gloves remained the same.

During the Silver Millennium, Sailor Uranus was a Princess of her home planet and wore a deep blue gown with ribbons down the back and a choker on her neck. As a Princess, it was her duty to protect the solar system from an outside invasion. This form is seen only in Act 41 and in secondary art pieces along with the other Princesses. She dwelt in Miranda Castle.

After being killed by Sailor Galaxia in the Stars arc, Sailor Uranus is revived. Once revived, she wears her Eternal Sailor outfit with the Galactica Bracelets that are very similar to the ones Galaxia wears. The bracelets are gold with a gem on each bracelet, one purple, and one green.

Sailor Uranus first makes an appearance while she and Sailor Neptune are observing Sailor Moon and the other Senshi defeat their second Daimon. After the fight, Sailor Venus saw them, and the duo fled the scene before the Senshi could properly identify them. Later, after the Sailor Senshi defeat Eudial, they spot Sailor Uranus watching them again, as she flees. Sailor Moon chases after her and Sailor Uranus reveals herself, warning Sailor Moon not to get in their way. She kisses Sailor Moon on the lips and escapes before the Senshi can stop her. At a recital, Mimete attacks the people and the Senshi intervene, and Sailor Uranus destroys the witch with World Shaking. Once Mimete was gone, the two Senshi make a proper introduction to the other Senshi. After making it clear they were not allies, the two Outers attack the other Senshi and escape. Later, Ami investigates Mugen Academy to learn its secrets but is attacked by Viluy, and Haruka and Michiru are exposed as spies trying to help. The three transform and Sailor Uranus summons the Space Sword and uses it to kill Viluy, saving Sailor Mercury. Sailor Mars recognizes the sword as a talisman, but the two run away before she could question them.

Sailor Uranus appeared with Sailor Neptune and the newly awakened Sailor Pluto after she destroyed Tellu. The Outers spoke with the other Senshi that it was their mission to protect the system from outside forces but the Death Busters slipped pass them using the warped space in the Omega Area. They told the Senshi that it was their fight and that the others should not involve themselves in the fight, especially since the Outers still have to deal with the real enemy. Later, Haruka is attacked by Cyprine and transforms into Sailor Uranus and is joined by Sailors Neptune and Pluto. The other Sailor Senshi join and Cyprine used her mind control abilities to turn the Inner Sailor Senshi against one another. Sailor Moon, Tuxedo Mask, and Sailor Chibi Moon combined their power, creating the Holy Grail and breaking the control over the Senshi. The Inner Senshi added their power to the grail and the Outers added the power of their talismans to the grail and once Sailor Moon drank from it, she transformed into Super Sailor Moon. After Cyprine and Ptilol were destroyed, the Outers told the other Senshi about how the talismans were meant to awaken the final Senshi, Sailor Saturn, and that if she awakens, she will destroy the world like she did when she ended the Silver Millennium after the Dark Kingdom attacked it. They also said Hotaru is Sailor Saturn, and to prevent her awakening, they will have to kill her. The other Sailor Senshi disagreed and the Outers left, saying that there is the ability to do what was necessary is the reason why the Outers can't work with them. The Outers watched Hotaru as Sailor Chibi Moon went to see her, but suddenly, Hotaru began to change into Mistress 9 and stole Chibiusa's Silver Crystal, along with her Soul. The Outers noted that their talismans hadn't reacted so this new being wasn't Sailor Saturn.

Sailor Uranus' character was not developed until partway through the Sailor Moon series after the other Sailor Guardians had already been established. Early designs for Sailor Uranus showed her being softer and more feminine than she would later become. Sailor Uranus is very androgynous. As seen in early drawings, Sailor Uranus' Space Sword was drawn with a straight blade, rather than the one seen in both the manga and anime with a slight curve to the tip.

The Outer Sailor Senshi introducing themselves in the Dream arc 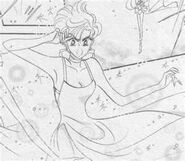 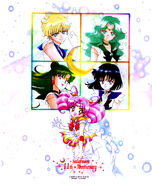 The artwork of Sailor Uranus that was seen on Volume 7 of the shinsouban edition of the manga.

Sailor Uranus by Arina Tanemura.
Add a photo to this gallery

Retrieved from "https://sailormoon.fandom.com/wiki/Haruka_Tenou_/_Sailor_Uranus_(manga)?oldid=229023"
Community content is available under CC-BY-SA unless otherwise noted.