Haruka is an older teenage girl with short, pale tan hair and dark blue eyes. She is the second tallest Sailor Senshi.

Haruka is mostly shown wearing masculine or unisex clothing, and there are probably zero to two instances of her wearing feminine clothing though she is seen wearing more female clothing in the manga. She is often mistaken for a male, due to her androgynous features.

Her primary casual appearance since the third until the fifth and final season, she wears a light yellow formal suit jacket with green short-sleeved undershirt, matching white pants and brown leather shoes. She also wears a golden cross necklace on her neck. In Sailor Stars, the color of her jacket and pants are now gold.

In her Super Senshi form, her appearance is like the rest of the Super Senshi and she gains another hoop earring on her right ear to make her gold hoop earrings into pair, her uniform has a single white line in each side and her dark blue bow at the back was lengthened and the gem at the center of her bow is now heart-shaped and her choker has a gold star shape at the center of her choker.

While she does not make a formal appearance in the second season, Haruka appears in a silhouette alongside Sailor Neptune in the final episode, which acted as a "teaser" to the third season.

She and Michiru made their physical appearance in Episode 92 where she challenges Minako after she defeats Usagi in a car racing game. Both girls were infatuated by her due to her masculine looks and she manages to defeat Minako.  Michiru arrives to see Haruka and the girls were shocked to see Michiru; both leave the arcade center. Both are seen talking about what is happening to their world while Michiru senses that the sea is acting up. They were unaware that both, Minako and Usagi, are spying on them. Later, her best mechanic was the target of the Daimon that Kaolinite had summoned. She wanted to help him, but Michiru tells her not to and both begin to chase the daimon with Haruka's motorbike after the daimon gets the Heart Crystal. As they are in mid-air, they transformed into their Sailor Senshi forms, off-screen. They are seen in their Outer Sailor Senshi forms, Sailor Uranus and Sailor Neptune, and both, Sailor Moon and Sailor Venus saw their appearance and both attacked the Daimon with World Shaking and Deep Submerge as Sailor Venus tells Sailor Moon to finish the job and defeats the daimon with Moon Spiral Heart Attack. After that, Michiru and Haruka arrived in the arcade center as she is seen handling her jacket. Minako was shocked to Haruka's female appearance while in her male uniform and she was slammed comically by Rei and Makoto knowing that they are searching for the handsome guy they were talking about and tells them that they give up. Michiru then shows her true gender to them, that in fact, she is a girl, much to the girls' shock and Haruka happily apologizes to them. Minako was disappointed and Usagi claims to have been right the whole time (even though she had been fawning over Haruka just as Minako had been).

By the fifth season, Haruka and Michiru have returned to Azabu-Juban. They are seen in an aquarium together, discussing when they feel most calm. When they walk outside to see the "shooting stars", Haruka is nicked by a shard of glass. From the pieces of glass, the Mirror Paedri appear, and the two transform. They are soon shocked to see that Sailor Pluto is alive and has taken custody of baby Hotaru from Professor Tomoe. When the three soldiers are cornered, Hotaru grants more strength and power and Haruka, Michiru, and Setsuna are upgraded into their much stronger and more powerful Super Sailor forms.

In the next episode, Haruka, Michiru, and Setsuna are living together, raising Hotaru after her rapid growth from the previous. When they walk into her room, the three are surprised to see the growing Hotaru's precognitive abilities and the calamity that will soon affect both the Moon and Earth.

Throughout the second arc of the fifth season, Haruka is constantly suspicious of the Three Lights and their origins and becomes extremely protective when Seiya is hanging out with Usagi. 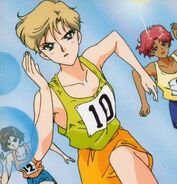 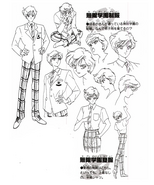 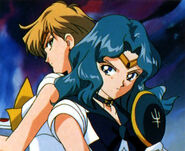 Retrieved from "https://sailormoon.fandom.com/wiki/Haruka_Tenou_/_Sailor_Uranus_(anime)?oldid=229295"
Community content is available under CC-BY-SA unless otherwise noted.