Gurio Umino is a smart, stereotypical nerd who was a classmate of Usagi Tsukino and Naru Osaka.

He is usually called by his family name "Umino", is a socially-awkward friend of Usagi Tsukino and her best friend Naru Osaka. He is very intelligent, but at some point, he could be arrogant and a bit of a "Mr. Know It All". He was usually the one who kept the others up-to-date on information on Sailor V, the strange crimes and rumors in Tokyo, and on students such as Ami Mizuno and Makoto Kino.

His family name is like that of the Inner Sailor Guardians, and is supposed to mean "ocean field", or a pun-like meaning of "of the ocean". Gurio, however, is written in hiragana and has no exact meaning, but it could come from guri guri meaning "turning" or "to turn" since he wears glasses with swirls in them.[1]

He never appeared in any of the Bandai or Nelke musicals. However, he made his first official debut in the Nogizaka46 Sailor Moon Musical. 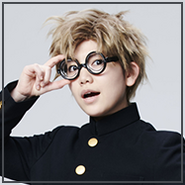 Retrieved from "https://sailormoon.fandom.com/wiki/Gurio_Umino_(Sera_Myu)?oldid=229068"
Community content is available under CC-BY-SA unless otherwise noted.