Garoben is a youma Sailor Moon fought in Episode 2.

Garoben (who was unnamed in the manga) was sent by Jadeite and ran the Crystal Seminar where she promised students that they would become geniuses. But she used the computer program to brainwash the students to become minions of the Dark Kingdom. Sailor Moon found out about the program and went to the Seminar, disguised as a nurse to rescue the students. The youma used papers to attack Sailor Moon and held Ami hostage, realizing Ami wasn't using the program like the other students were. Ami's pen glowed and the sign of Mercury appeared on her forehead, causing a cold fog to envelop the room. The youma tried to take advantage of the fog and attack Sailor Moon, but she was saved by Tuxedo Mask. Then, Sailor Moon used Moon Frisbee to cut the youma in half, killing her. 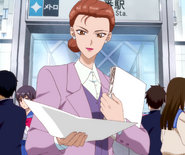