The "Garnet Orb" is one of three Talismans wielded by the Outer Sailor Senshi. The orb is an essential component of the Garnet Rod, an immensely powerful planetary weapon in the possession of Sailor Pluto, and is the focal point for performing the attack Dead Scream, which was her only offensive attack in the anime.

Unlike the other two Talismans that were sealed within the Pure Hearts of Sailor Uranus and Sailor Neptune the orb was already in the possession of Sailor Pluto when she was first introduced. It was wielded on top of the immensely strong and powerful Garnet Rod.

Sailor Pluto was able to use the power of the Orb to pull the other Talismans from their respective Pure Hearts, which meant Sailor Uranus and Neptune were able to remain alive once they were removed. Apart from being a part of the Garnet Rod, the Garnet Orb didn't serve another purpose other than to summon the Holy Grail.

As in the manga, the Garnet Orb serves as the third and final Talisman for summoning Sailor Saturn, the tenth and last Sailor Senshi.

In the manga, all three Talismans were in the possession of their owners, when they were introduced. Once they were used to summon the mighty Holy Grail, Usagi was able to transform into her much more powerful Super Sailor form as Super Sailor Moon. However, the main function of the Talismans was to call upon Sailor Saturn herself, as they did after the Silver Millennium fell into ruin. The orb also allowed Sailor Pluto to use the Garnet Ball and Chronos Typhoon attacks.

Sailor Pluto with the Garnet Orb 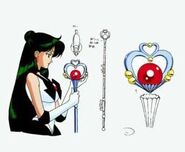 The Garnet Orb in Crystal
Add a photo to this gallery
Retrieved from "https://sailormoon.fandom.com/wiki/Garnet_Orb?oldid=240005"
Community content is available under CC-BY-SA unless otherwise noted.