"Fighter's Secret Identity: the Shocking Super Transformation" was the 10th episode of the fifth season of the Sailor Moon anime and the 176th overall. It first aired in Japan on June 8, 1996.

Seiya, Taiki and Yaten will have main roles in a new school musical, but the play's director seems to put too much pressure on Seiya.

Seiya, Taiki and Yaten are practicing for a musical. They seem to be doing their best when the director stops the practice and reprehends Seiya. He asks her very angrily what is wrong, but she only says "Everything", which only makes the young idol angrier.

At school, Usagi is having some issues with the math exam. Surprisingly, so is Seiya and he finally breaks and suddenly screams in the middle of the class. When he and his friends leave, Usagi teases him about having to take the make-up exam, but he says he can't concentrate because of the musical and its director. Rei, to everyone' surprise, shows up and suggest Seiya that if they want, all the boys and girls could meet at her house to studying, because that was that they (Rei, Ami, Makoto, Minako and Usagi) had done to enter a good high-school (despite her school not having entrance exams). With an awkward gesture, the three boys reject the proposal, saying that they have a musical practice, and then leave. Usagi, Makoto and Minako follow them, leaving only Ami and an angry Rei, but eventually they follow their friends too.

At the practice, things aren't going well for Seiya: The director still complains about him not putting forth all his effort. At the break, he says that he can't take it, all she does is complain and never gives any actual advice to help him to improve. Usagi tells him that there is always someone who you can't get along with, but Rei interferes and the two start arguing. The break finishes and the director shows up to tell the group it's time to work and orders the girls to get out of there. Then she starts teasing Seiya about becoming and idol to attract girls, but he strongly denies it, and she takes off her glasses which causes Rei to recognize the director as sister Angela, a nun of her Catholic school. The director also recognizes Rei, but all are surprised of knowing that the director is actually a nun.

In another place Chuuko Nezu glances through some magazines in search for another victim when she finds an ideal one: Akane Gushiken, a succesful musical director about to release a new musical starring Three Lights. Then a phone rings and she says that she has her next target.

Seiya and Usagi are at Rei's school to check if the director is in fact one of the school's nuns, so they wait until she shows up. When the nun appears, they see her face revealing her identity and Seiya decides to confront her. He follows her to the church and ask her if she isn't the musical's director. Akane says that's just one thing she does and she's not willing to give up any of the things she likes, but even then, she puts all her efforts in them, something that Seiya is not doing. These words really annoy him. When they sit down to talk, Akane tells him that she's watched one of their concerts, complimenting their performance; Seiya thanks her: They always sing with all their heart to find that one person, but then, Akane adds that his performance in the current musical is terrible. She can't understand how someone who transmits such a beautiful message on his own concerts, can't transmit her musical's message; acusing him of not burning himself completely. However, she still believes in him, so she'll push him until he shows her his true shine and she leaves the church.

On the way back, Seiya asks Usagi if she has a boyfriend. She says she has, but he's overseas. Seiya smiles and says he still has a chance. Usagi realizes he's not going home and Seiya replies he's to attend the musical practice; Usagi yells at him because the make-up exam is tomorrow, but he just tells her she wouldn't understand.

At the musical practice, the room is empty. Only Akane is present, but she's sort of sleeping. Suddenly, Seiya appears in practice clothes, ready to start practicing. Usagi has followed him and sees the whole practice until Rei appears from nowhere and reprimands her for not being at home, studying for the exam. Rei pulls on Usagi's ear, and the two girls leave the facility.

It's almost night time and Akane is very satisfied with Seiya's acting. She realizes how late it is already, so she tells Seiya to stop practicing, but he refuses to. Akane smiles and go downstairs to get two beverages from a nearby vending machine. Before she could reach the stairs, Chuuko Nezu shows up and introduces herself to Akane. However, the musical director is not interested in doing any interviews: She says that all Nezu's questions can be answered by watching the musical. Akane's answer irritates Nezu, who just takes off her disguise and attack the defenseless woman. Seiya hears Akane's scream, but when he attempts to help her, Sailor Iron Mouse makes him step back by shooting him with her bracelets. Finally, the evil senshi extracts Akane's Star Seed, but it soon loses its shine, which indicates that it's not the wanted Star Seed. As a result a new phage emerges: Sailor Director. Iron Mouse instructs it to kill Seiya and then she vanishes in a telephone box.

Seiya doesn't know what he should do and the phage takes advantage of this by attacking the young man with a film's tape fired off at high speed. He doesn't want to wait anymore, so an ear microphone appears on his head and he yells the phrase "Fighter Star Power, Make Up ". A transformation sequence begins: his male body slowly changes to the one of a woman, and her identity is revealed: Seiya Kou is in fact Sailor Star Fighter. She quickly attacks the monster with Star Serious Laser, easily knocking it down, but when she's about to deliver the final blow, Sailor Moon and Sailor Mars stop her cold. However, Fighter is determined to kill Sailor Director and the presence of the two other senshi doesn't change her mind, so she attempts to strike once again at the monster, but Mars stops her completely by aiming her Mars Flame Sniper attack at Fighter's body: If she touches the phage, she will shoot her; and Sailor Moon is free to perform Starlight Honeymoon Therapy Kiss and heal Akane.

By the end, Fighter bids farewell to Sailor Moon and Mars hoping that they are not enemies.

The next day at school, Seiya gets a 98 score at the make-up exam. Neither Minako nor Usagi can believe it, but he says that he always gives everything in order to succeed. The scene ends with an image of a galaxy with a unknown woman's silhouette and Seiya's voice in the back saying that he's to do his best until their message reaches her. Slowly, the woman' silhouette changes to take the form of Sailor Moon.

Seiya, Taiki and Yaten at the musical practice. 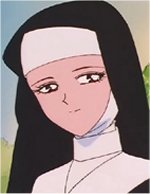 Akane Gushiken in her nun's clothes.

Episode's final scene
SailorStarsPrincessKakyuuFadesOutToTheBlessedVirginMotherMary.png
The Princess' silhouette fades out into the face of the Blessed Virgin Mother Mary.
Add a photo to this gallery
Retrieved from "https://sailormoon.fandom.com/wiki/Fighter%27s_Secret_Identity:_The_Shocking_Super_Transformation?oldid=218626"
Community content is available under CC-BY-SA unless otherwise noted.