Eudial is named after Eudialyte, a rare red-colored silicate mineral.

The kanji in Eudial's alias surname translates to either "exist" or "maintain" (有) and "village" (村). Her given name "Yuuko" (ゆうこ), is written in hiragana, and thus, can have multiple meanings such as "gentile child", "eternal child", or "abundant child".

Eudial has shoulder-length red hair ties off into two loose ponytails, one in the back and one on the left side of her head. Like the other members of the Witches 5 organization, she has a black star ornament located on her neck, apparently hanging from which is a red flower-shaped object made from an unknown material with violet tassels dangling from it. She wears a sleeveless crop top and a pair of red baggy gym pants, coupled with a black pleated belt/skirt adorned with a single red star. She wears red star-shaped earrings a red bracelet on each wrist and what seems to be a set of brass knuckles. Her footwear is a pair of red, cross-laced high heels. Her theme color is red.

Her Daimon form looks like a Gorgon monster with a black star on her forehead.

Eudial first appears in Act 27. She, as Yuko Arimura, accompanied her students to a school camp on Mount M, and coincidentally was there as the Inner Senshi were staying nearby, visiting Rei at her training camp.

During the night, Eudial led her students in a special ritual which was intended to sacrifice their souls to her master, Pharaoh 90. Sailor Mars and Sailor Jupiter discovered her, however, and interrupted the ritual. When Eudial was hit by Sailor Mars' Mars Snake Fire attack, she transformed into her gorgon-like Daimon form and was killed by Sailor Moon.

Eudial is briefly resurrected, along with the other witches, by Kaolinite in Act 34. After being separated from the other Senshi, Sailor Mars makes her way to the Etiquette classroom. She bursts in to find Eudial in her Yuuko Arimura guise. Eudial chides her for having no manners, and as the instructor of the etiquette will teach her. Sailor Mars is shocked to see her but is rather impressed that she hasn't given up. Eudial kicks her and she falls to the floor. She calls her weak, concludes that she isn't willing to protect Sailor Moon, only wanting to further her training. In the end, Eudial and the rest of the Witches 5 are destroyed for good by Space Sword Blaster, Chronos Typhoon, and Submarine Reflection.

In the Materials' Collection, it was noted that Eudial did have an attack called Fire Buster, although it is never used. 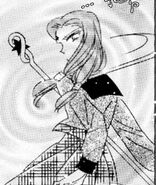 The Witches' 5 during their brief resurrection

Retrieved from "https://sailormoon.fandom.com/wiki/Eudial_(manga)?oldid=229114"
Community content is available under CC-BY-SA unless otherwise noted.