Eudial is the first of the Witches 5 who works for the Death Busters.

Eudial is named after Eudialyte, a rare red-colored silicate mineral.

The kanji in Eudial's alias surname translates to either "exist" or "maintain" (有) and "village" (村). Her given name "Yuuko" (ゆうこ), is written in hiragana, and thus, can have multiple meanings such as "gentile child", "eternal child", or "abundant child".

Eudial retains her appearance from the manga.

Eudial met with Kaolinite, along with the other Witches 5. Kaolinite showed them photos of the Sailor Guardians and ordered the witches to kill them with the promise that those who can be elevated to the title of Magus. Eudial found a cat by Tomoe Research Labs on Mugen Academy and infected it with a Daimon Egg. The cat turned into a Daimon, attracting the attention of Sailor Guardians and, accompanied by his fellow wizards, and Eudial ordered to attack them. Once the Daimon was destroyed, and the other Eudial witches fled. After receiving Kaolinite orders, Eudial gathered new students for a summit to "train" in close proximity to Rei location where she was meditating. The night after the Sailor Guardians come to visit Rei, Eudial gathered students around a fire, put students under a hypnotic trance and began to have them offer their souls to Pharaoh 90. Sailor Mars and Sailor Jupiter stop the ritual and engage in battle with the witch. Eudial uses powerful fire attacks, fighting both through the terrain. She was able to dominate them, but before she could finish them, the other Sailor Guardians, Sailor Moon arrived and destroyed with the Spiral Heart Moon Rod. After her body was destroyed, the Daimon egg inside it was left behind, but dissolved.

One by one, each of the Witches 5 was sent to collect souls for Pharaoh 90 and each one was destroyed by the Sailor Guardians. After they were all destroyed, Mistress 9 awakened shortly after and ordered Kaorinite to deal with the Sailor Guardians once and for all. Kaolinite used her magic to revive the Witches 5 and once the Inner Sailor Guardians entered Mugen Academy, each of them was captured by a Witch by using their desires to cause them to submit. Sailor Moon was the only Guardian left able to resist the mind manipulations, but she had to face off against the entire Witches 5 alone. After being separated from the other Sailor Guardians, Sailor Mars makes her way to the Etiquette classroom. She bursts in to find Eudial in her Yuuko Arimura guise. Eudial chides her for having no manners, and as the instructor of the etiquette will teach her. Sailor Mars is shocked to see her but is rather impressed that she hasn't given up. Eudial kicks her and she falls to the floor and then tilt Sailor Mars head up with her staff. She calls her weak, concludes that she isn't willing to protect Sailor Moon, only wanting to further her training. The Witches 5 were able to subdue her, but the Outer Sailor Guardians were able to break into Mugen Academy with Sailor Uranus' Space Sword Blaster, destroy the Witches 5 with Sailor Neptune's Submarine Reflection, and free Sailor Moon and the Inner Sailor Guardians with Sailor Pluto's Chronos Typhoon.

Eudial is able to channel the fire through her hands. Using a ritual, it could reap the souls of others to serve the Pharaoh 90. it can instantly change clothes and, like the other Witches 5 members, could float in the air. 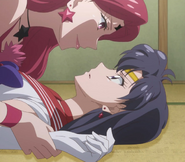 Retrieved from "https://sailormoon.fandom.com/wiki/Eudial_(Crystal)?oldid=239643"
Community content is available under CC-BY-SA unless otherwise noted.