Esmeraude is one of the members of the Black Moon Clan.

Esmeraude's name is taken from the obsolete French word for emerald.

She retains her appearance the same in the anime and manga.

In Birth! The Princess of Darkness - Black Lady, Esmeraude disguised herself as the mother of Aaron and Manna during her appearance at a contest she had created to trap the Sailor Senshi and steal their Silver Crystal. She appeared as a richwoman and danced alongside Petz, Calaveras, Veneti, and Aquatici while Aaron and Manna performed an orchestral version of "La Soldier." The plan proved to be a success when Minako took away some of Esmeraude's money and accidentally pointed out the carrier of the Silver Crystal. 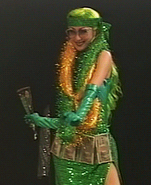 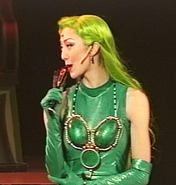 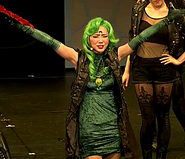 Retrieved from "https://sailormoon.fandom.com/wiki/Esmeraude_(Sera_Myu)?oldid=219641"
Community content is available under CC-BY-SA unless otherwise noted.