The "Deep Aqua Mirror" is Sailor Neptune's Talisman, which she used to perform the attack "Submarine Reflection". It was used not only as a weapon but also to reveal the truth and the location of enemies.

As with the other talismans, the items were already possessed by their owners; rather than being made to summon the Holy Grail they were made to summon Sailor Saturn herself. The mirror has been seen to work for others besides Sailor Neptune as Chibiusa once used it to locate and teleport to a different location. Michiru gave Chibiusa the mirror at some point before the Dream Arc. When the Outer Sailor Guardians returned, Chibiusa teleported the mirror back to Super Sailor Neptune to help her fight the Dead Moon Circus.

In the third season, the Mirror was found sealed within Michiru's Pure Heart Crystal. Once it was brought out with the other two talismans, the Space Sword and the Garnet Orb, the almighty Holy Grail was produced. Sailor Neptune later uses the Deep Aqua Mirror to find the real Germatoid before Sailor Uranus kills it with her Space Sword.

In the 5th and final season, Super Sailor Neptune had used it once.

Michiru is carrying her magical hand-mirror with her when she passes by Mamoru, who accidentally makes it fall on the ground. She says that the mirror depicts the past lives of others. The mirror has been used for Submarine Reflection attack and can create a barrier.

The item appears in the video game Sailor Moon: Another Story as Sailor Neptune's Talisman, only appearing in the "Rare Items" sub-menu. It cannot be selected nor equipped by any character, and has no sprite; however, it does appear as part of the animation for Submarine Reflection. 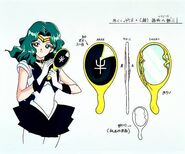 Retrieved from "https://sailormoon.fandom.com/wiki/Deep_Aqua_Mirror?oldid=226186"
Community content is available under CC-BY-SA unless otherwise noted.