"Crisis, Make Up" is the command used when Sailor Moon used the Holy Grail to transform/evolve into Super Sailor Moon.

Later in Act 36, when Pharaoh 90 was making his way to Earth, Sailor Moon summoned the Holy Grail. Surprisingly, another grail appeared and when Sailor Moon shouted Crisis, Make Up, Sailor Moon and Sailor Chibi Moon both transformed into their Super forms.

In the manga, for the Grail to be summoned, all 8 Sailor Guardians had to assemble.

Afterward, when the Death Busters had been defeated, Sailors Uranus, Neptune, and Pluto had left to take care of baby Hotaru. Without them and the arrival of the Dead Moon Circus, Usagi and Chibiusa could not summon the grail. Though, Pegasus granted them a new power to transform into their Super Sailor forms with the Crisis Heart Compacts.

In the anime, with Sailor Moon already in her normal form, she lifted the Grail shouting "Crisis, Make Up". It opens, spilling out golden light that enveloped her, forming a cocoon shape around her. It bursts open along with rainbow butterflies and transforms Sailor Moon's uniform into her Super uniform and then she assumes her final pose.

In the “special” version, Sailor Moon received the power of the Inner Sailor Guardians and Sailor Uranus and Neptune. The moon on her tiara is filled and lit with the colors of the 6 Guardians and as she shouts out ”Crisis, MAKE UP!” her Pure Heart Crystal appears. Folded/crumpled rainbow wings appear, then Sailor Moon appears in a bending position. She slowly stands up and the wings unfold, her Pure Heart Crystal emits sparkles then she spreads her arms and her wings turn to gold. She is then flying around in her Super Sailor Moon form with rainbow butterflies. 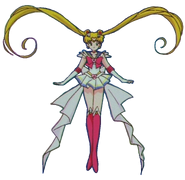 Retrieved from "https://sailormoon.fandom.com/wiki/Crisis,_Make_Up?oldid=241157"
Community content is available under CC-BY-SA unless otherwise noted.