Start a Wiki
"I am the Pretty Guardian Trainee who fights for Love and for Justice! I am Sailor Chibi Moon! And now in the Name of the Future Moon, I'll punish you!"
— Sailor Chibi Moon's introduction

Usagi "Chibiusa" Small Lady Serenity is the crown princess of Earth in the 30th Century, the daughter of Neo-Queen Serenity and King Endymion and the civilian identity of Sailor Chibi Moon.

Chibiusa has pink hair and red eyes. Like Usagi, she wears her hair in odango, though instead of the buns being round, they are styled to look like a rabbit's ears. She is older than she looks in the manga. She is 903+ years old, as was told by her father King Endymion. She is the youngest (with the exception of Hotaru) and shortest Sailor Senshi. At the beginning of the series, she stood at the height at about 3'6", and continued to grow taller through the following arcs.

As Super Sailor Chibi Moon, her Uniform almost completely changes. Her collar's two white lines become yellow. Her choker is now yellow, with a pink heart. The skirt is the seemingly most changed, becoming white with the border being yellow and pink, plus her belt on her skirt is now yellow. She gets the same translucent shoulder pads as Super Sailor Moon, with a bright yellow crescent moon on her tiara. She also keeps her feathers on her head, and has crescent moon earrings. Her bow is long and white.

Her Eternal uniform consisted of a white leotard with a red chest bow and a yellow star-shaped brooch affixed to it. Her sailor collar was pink with a single white stripe. There were pearly feather clips in her hair, she wore red odango covers on her cone-shaped odangos, a pink choker with a star motif, and wore star stud earrings. Her tiara was gold with a pink star. She had pale pink bubble-like sleeves with a double row of pink trim and white elbow length gloves with pink elbow pads. Her skirt had two layers: the first layer was pink and the second layer was pale pink. The waist was defined by a double row of pink and pale pink ribbons with a yellow star brooch affixed to them. There was pink bow at the back with two trailing pink ribbons. Her footwear consisted of white knee-high boots with pink inverted triangular arches with yellow stars at the bases.

In her future form, Chibiusa's physical appearance had matured into adolescence and her hair had grown out to resemble her mother's. In the "All-Characters" image in the artbook Original Picture Collection Volume IV, she appeared to have silver hair, though in the Original Picture Collection Volume V, she appeared with pink hair.

Chibiusa used to be very bratty and annoying to Usagi, however, she has matured into a very friendly and compassionate person who really helps the sailor scouts. These traits are shown majorly within the manga and Sailor Moon Crystal.

Chibiusa was born as "Usagi Small Lady Serenity", the only child of King Endymion and Neo-Queen Serenity and the Princess of the Silver Millennium. However, Chibiusa had stagnated in growth, being physically and mentally a child for over 900 years, something that is unusual for even the long-lived people of the Moon Kingdom. She also never showed any sign of developing powers that worried her parents who feared that she might not be able to carry the mantle of Sailor Moon.

Her lack of growth and magical abilities had led the people to believe that she is a fake princess who wasn't really the king and queen's daughter. Her father tried to make her feel better by telling her how much in common she has with her mother and by telling her how invincible Sailor Moon was. Unfortunately, this only made her feel as though she didn't matter to her mother and would never be able to compare it to her.

One day, Chibiusa wandered down a forbidden corridor and came across a strange door. After going through it, she met the Guardian of Time, Sailor Pluto. Even though Neo-Queen Serenity would chide Chibiusa for visiting her, she and Pluto would become good friends.

After being pressured by a group of children, Chibiusa would steal her mother's Legendary Silver Crystal. Unfortunately, the Black Moon Clan struck then, causing a huge shockwave to erupt. When she left the Crystal Palace to see what was happening, she saw her mother frozen in crystal and was consumed with guilt for taking the only thing that could have protected her.

The Black Moon Clan's attack killed many people and rendered the Inner Sailor Guardians, Luna and Artemis, and King Endymion in comatose states. As a desperate act to save her mother and her home, Chibiusa stole a Space-Time Key from Sailor Pluto in order to seek help from Sailor Moon and the Sailor Guardians of the past.

Chibiusa first appears in Act 14, after the defeat of the Dark Kingdom, where she falls from the sky, interrupting Usagi and Mamoru's kiss, and ends up kissing Mamoru and falling on Usagi (by accident). Usagi angrily tells the girl to get off of Mamoru. Chibiusa curiously says Mamoru and turns and looks at Usagi. Usagi becomes slightly confused looking at this girl and asks her name, and the little girl replies that her name is Usagi. The girl asks who the heck Usagi is, and why she is copying her hairstyle. Usagi angrily replies that her name is Usagi and that she is copying her hairstyle. The girl replies "You're 'Usagi Tsukino'? If you are who you say you are, then you must have the Legendary Silver Crystal!" and pulls a gun out on Usagi, demanding that she hand the crystal over or else she'll shoot her.

Continuing from the end of Act 14, in Act 15, the scene resumes with the little Usagi demanding the Silver Crystal, while threatening the older Usagi with a gun, claiming that it is real, and if she doesn't hand it over, she will shoot. There are a click and a bang, revealing that the gun is actually fake. Mamoru picks up and drops the little Usagi on the ground, saying that she really scared him. The little Usagi stands up and runs away. While searching for her, Usagi and Mamoru eventually find her alone in a park on a swing and mutters "Mama". Mamoru calls out "Chibiusa", and offers to bring her home. Chibiusa claims that Mamoru is warm, like her "Papa." He asks Chibiusa where she came from, and Usagi asks Chibiusa if she knows her from somewhere, and how she knows about the Silver Crystal, only to receive a glare in return.

Usagi and Mamoru bring Chibiusa to Usagi's house. Luna is waiting outside. She sees Chibiusa and asks why the girl is here, and Usagi explains "that she happened to fall out of the sky when we were at the park. It was totally natural." Chibiusa hides her face, and Mamoru asks Luna to stop glaring at her (with Luna denying that she was glaring.) Chibiusa decides that she will watch Usagi for a while, transforms Luna P into an umbrella, and hypnotizes Usagi, her family, and Mamoru (and Umino), though Luna is able to stop Usagi and Mamoru from being hypnotized. Chibiusa is welcomed into the Tsukino home by a hypnotized Ikuko. Usagi drags Chibiusa to her room and demands to know who she is and to turn her family back to normal but refuses to answer. Shingo bursts in saying that "Usagi's picking on Usagi". Shingo then calls her Chibiusa, only to reply that she isn't little. While she is walking away, Luna catches a glimpse of the charms on Chibiusa's necklace: a key and a crystal.

In only a few days, Chibiusa has settled into the Tsukino household comfortably. On the day of the T*A Academy for Girls' school festival, Usagi asks Luna to watch Chibiusa while she is gone. Though Luna's attention is captured by milk, and she sneaks away. Chibiusa follows Usagi to the festival, and witnesses Usagi transform into Sailor Moon when Koan attacks. She is rather shocked to see the Crystal Star brooch and the formation of the Cutie Moon Rod in front of her eyes. Sailor Mars is then abducted

In Act 16, after detransforming, Usagi, Mamoru, Ami, Makoto, and Minako, catch Chibiusa walking away. Usagi begins questioning her: why she is here, is she spying on them, and if she knows what is really happening, even believing that Chibiusa is part of the group of people that abducted Rei. Luna appears and Usagi asks why she is covering for the young girl while Chibiusa runs away. Usagi catches a glimpse of the charms on her necklaces, easily recognizing the one that resembles the Silver Crystal. In the evening, Mamoru and Luna find Chibiusa sitting in the rain in a park. She is brought to his apartment and falls asleep. She has a dream where she is running in darkness, calling for her mother. Someone beside her reminds her that she has nothing to worry about: that the legendary guardian, Sailor Moon, cannot be defeated. Chibiusa soon wakes up crying. Mamoru tries to cheer her up using a Tuxedo Mask doll and ventriloquism. She nervously says that she can also make things talk and demonstrates by bouncing Luna-P, and it calls out "Small Lady". Chibiusa explains that "Small Lady" was the name given to her by her mother. After seeing the presence of something, Mamoru notices her necklace and asks if the key is the key to her house. She responds that it is an important key and that she does need it to get home. Before going back to sleep, she asks if Sailor Moon is really that strong, with Mamoru replying that she is invincible.

Chibiusa can transform into Sailor Chibi Moon by uttering the words, "Moon Prism Power, Make Up!"

Adding in Usagi's child to the Sailor Moon storyline, as well as her name, Chibiusa for a chibi (little) Usagi, was the idea of Naoko Takeuchi's editor, Fumio Osano. Takeuchi has stated that she did not think much about how Chibiusa's hair would look, besides it having odango like Usagi's hair and being pink; and that she used a Chibiusa doll for reference on the hair.

The first appearance of Chibiusa as a Sailor Guardian is in a side story, a year and a half before Sailor Chibi Moon made her debut in the manga. In the first Picture Diary, Chibiusa is rescued by Sailors' Moon and Venus and dreams that night about becoming a "Guardian of Love and Justice" herself. She calls herself "Sailor Chibiusa Moon" and appears in a uniform slightly different from the one she wears later, most notably including a cape.

Chibiusa talking to Mamoru about her key

Chibiusa after switching ages with Usagi 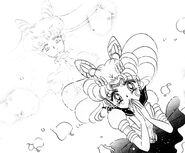 Kae Araki's picture of Chibiusa from the Infinity Artbook.

Concept art of Chibiusa and Sailor Chibi Moon in the Infinity arc.
Add a photo to this gallery

The Inner Senshi on the cover of volume 10 of the Kanzenban manga.
Add a photo to this gallery

Retrieved from "https://sailormoon.fandom.com/wiki/Chibiusa_Tsukino_/_Sailor_Chibi_Moon_(manga)?oldid=232940"
Community content is available under CC-BY-SA unless otherwise noted.