During Chibiusa's first days at Elementary School she meets new friends, Momo and Kyuuske, but she thinks there is something off about the transfer student, Lilica. She and her friends visit Lilica's house and discover she is a vampire before they are saved by Sailor Moon and Sailor V.

This short story takes place when Chibiusa's starts attending Juban Public Elementary School placing it near the beginning of the Black Moon arc. It opens with Chibiusa introducing herself to her class with her proper name "Usagi Tsukino". 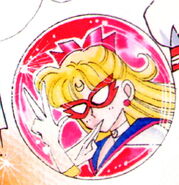 Chibiusa protecting her friends with her garlic breath.