CereCere (セレセレ, Seresere) is one of the members of the Samael Quartet. She is also a member of the Sailor Quartet as Sailor Ceres (セーラーセレス, Seeraa seresu) .

Unlike her appearance in the anime and manga, CereCere, along with the rest of the Samael Quartet, wore more conservative clothing, consisting of a hot pink long-sleeved top, a yellow skirt and magenta ballet flats with pink flowers at the toe.

Sailor Ceres has the same appearance as her manga counterpart. 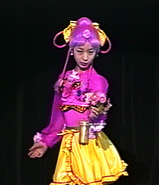 CereCere from Transylvania's forest - New Appearance! The Warriors Who Protect Chibi Moon
Add a photo to this gallery

Retrieved from "https://sailormoon.fandom.com/wiki/CereCere_/_Sailor_Ceres_(Sera_Myu)?oldid=216405"
Community content is available under CC-BY-SA unless otherwise noted.