Calaveras is the second eldest of the Spectre Sisters, and a member of the Black Moon Clan.

Calaveras retains her appearance from the manga and the anime.

Calaveras' orders are to defeat Sailor Moon and Sailor Venus in order to finally abduct Chibiusa and take her to her master's sinister objectives.

Calaveras' major appearance was in act 18, conversing with her sister's spirits, saying that she will avenge them. The next scene she is on a Channeling DVD, by saying the Black Moon Clan are there to guide humans on the right path. The next day she was at a park, pretending to be channeling, but she was actually brainwashing the audience. After Sailor Venus came trying to confront her, her deceased sisters appeared and used Ayakashi Sisters Energy Attack to trap her. Sailor Moon arrived on the scene and freed Venus from Calaveras' hold and used Moon Princess Halation, which instantly killed Calaveras. 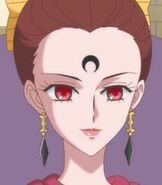 Retrieved from "https://sailormoon.fandom.com/wiki/Calaveras_(Crystal)?oldid=209259"
Community content is available under CC-BY-SA unless otherwise noted.