The Boule Brothers are minions summoned by Esmeraude for the Black Moon Clan.

In the Manga, they were Esmeraude's underlings. The two participated in Code: 005, Operation: Remake. Along with Esmeraude, the brothers trapped Sailor Moon within a fake Crystal Palace. While trapped, a magnetic field prevented her from using Moon Princess Halation. The brothers were was killed with the team effort of Tuxedo Mask's Tuxedo La Smoking Bomber and Sailor Venus's Venus Love Me Chain.

Art of the Boule Brothers from the Materials Collection 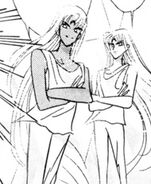 Retrieved from "https://sailormoon.fandom.com/wiki/Boule_Brothers_(manga)?oldid=239265"
Community content is available under CC-BY-SA unless otherwise noted.