Black Lady is an evil adult version of Chibiusa Tsukino from when she was corrupted by Wiseman (Death Phantom) in the Black Moon Arc.

Black Lady looked like a grown-up version of Chibiusa. However, in this form, her hair's longer and her eyes are described by Naoko Takeuchi as "done like glass balls" so that they can distinguish her eyes from Chibiusa's. She is also a bit shorter than Sailor Moon. She wore a long black dress with a slit on each side. The sleeve and chest portions are organdies. The fabric of her skirt is also the same color as the shawl that she is usually seen with. Also, the sleeve cuffs and collar have diamonds on them. Her footwear consists of satin high heels. She also wears black crystal earrings.

Originally, Naoko Takeuchi struggled with a name for Black Lady, initially calling her "the Black Queen", and retaining her childlike appearance. Naoko had also noted that the leg-slit on Black Lady's dress was even more revealing in the anime than in the manga, something which shocked her, as she had wondered if the slit was going too far in her own drawings of the character.

Art of Black Lady from the Materials Collection 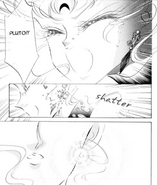 The advertisement Black Lady's artbook art is inspired by

Retrieved from "https://sailormoon.fandom.com/wiki/Black_Lady_(manga)?oldid=239663"
Community content is available under CC-BY-SA unless otherwise noted.