The plot, which is developed through its story mode, involves the Sailor Senshi fighting each other to choose a new leader. After beating an enemy, Sailor Chibi Moon and Sailor Mars began teasing Sailor Moon, calling her undependable. The rest of the Sailor Senshi decided to have a fighting contest to choose their new leader. The Senshi is chosen by the player and then fights with each of the Solar System Senshi, including Sailor Neptune, Sailor Uranus, Sailor Pluto, and Sailor Saturn who was not in the previous edition of the game. Once the player beats each Senshi, their character becomes the leader and the main screen of the game and the beginning of the story mode changed to reflect their leadership status. The game's system includes secret moves, special techniques and desperation attacks, which could be used once the character was low on health or when the timer for the match was close to ending. Most attacks and techniques in the game are pulled from the SuperS season; however, moves such as Moon Tiara Action and Venus Love-Me Chain from earlier seasons did appear. Moves from the manga are included as well and moves such as Mars Snake Flare and Silence Buster were created for the game. In each of the game's modes, excluding tournament and trainer, the player is able to access the "Ability Customize System" which allows the player to use points, five, ten, fifteen, or thirty with a cheat, to apply to their character. Using points allows the player to increase the character's special attack, physical attacks, playfulness, and defense, an option that increases the strength of the character's desperation attack.

The player's chosen character battles against the other nine Senshi in a tournament to become the new leader. Only the five Inner Senshi and Sailor Chibi Moon are available as playable characters in this mode.

The game features two Versus modes, one where the player's character battle against the game and the second involves the player battling against a second player. All ten Sailor Senshi are playable characters in Versus Mode.

In this mode, the player can learn the character's moves and train them. Training Mode is synonymous with a "Practice Mode".

Each of the battle stages belongs to one of the characters as their "home stage". 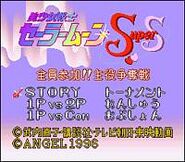 Title screen
Add a photo to this gallery

Retrieved from "https://sailormoon.fandom.com/wiki/Bishoujo_Senshi_Sailor_Moon_SuperS:_Zenin_Senkai!!_Shuyaku_Soudatsusen?oldid=240381"
Community content is available under CC-BY-SA unless otherwise noted.