The game is set during the events of the Stars season.

From the title screen, two modes are available to the player:

Sugoroku - In this mode, the player can pick from one of the five Inner Sailor Guardians and control them all in turn.

If the player wins the mini-game, they will see a new screen with Chibi Chibi, in which they can pick a prize. Prizes allow the player to advance five steps, three steps, roll a die or wait one turn.

If the player loses, they will see the same prizes but selecting one will move them backward instead. Highlighted prizes will rotate, so the player has to be careful with timing when selecting.

There is one special space with the Eternal Moon Article on it; which cannot be skipped. In this space, the player will play a mini-game in which they must choose between two chests, and then watch Eternal Sailor Moon's transformation sequence.

In "Game" Mode, the player can play all 10 mini-games that would be played in Sugoroku. There are two games per page.

The player will see six boxes that have three pairs of animals hiding within A pair of bluebirds, light brown puppies and white kittens. The player has three chances to guess the correct location of pairs by clicking on the boxes. Depending on which animal is hidden inside, a 'meow' 'woof' or 'tweet' will be heard.

ゆめのパフェたべまくり！/ Yume no pafe tabe makuri!: "A Dream of Eating a Parfait!"

The player controls Usagi as she eats four layers of a parfait. Pressing the red button as quickly as possible to eat each layer before time runs out.

The player and three other Sailor Senshi walk in a circle around three chairs as the music plays. When the music stops playing, the player press the red button repeatedly to run and take one of the chairs. The player who does not reach a chair loses. In each round, the number of chairs decreases by one.

ほんものはどれだ？/ Hon mono wa doreda? "Which is the Real Thing?"

ゆめのくもわたり/ Yume no Kumo Watari "A Dream of a Dream"

The player must jump from one moving cloud to another to reach the cloud-palace in the top right corner of the screen.

The player must gather the other four Inner Sailor Senshi that are dispersed within a garden-like maze; the player collects the Sailor Senshi while avoiding Sailor Buri.

The player must release three balloons at the right time in order to prevent crows, flying across the screen in both directions, from popping them.

Sailor Iron Mouse sends her shadows to attack the player on three different levels of a castle; Top, middle and bottom. the play eliminates them using the Eternal Tiare. If the shadows cross to the other side of the castle, the player loses. To win, eliminate any line of shadows until time is up. 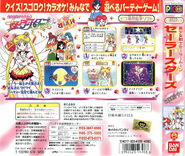 Back cover of the game
Add a photo to this gallery

Retrieved from "https://sailormoon.fandom.com/wiki/Bishoujo_Senshi_Sailor_Moon_Sailor_Stars:_Tokimeki_Paati?oldid=226515"
Community content is available under CC-BY-SA unless otherwise noted.