In the game, two Sailor Senshi fight each other using both basic physical and special attacks. Each Senshi has their own set of attacks, some of which are invented exclusively for the game. All of the Solar System Senshi, with the exception of Sailor Saturn, are playable characters.

There are four modes in the game: practice, tournament, versus, and story mode. In each mode, the basic gameplay is the same. In versus and story mode, the player can customize the abilities of the chosen Senshi by allocating points among six abilities. (See Ability Customization System)

The allocation of the skill points can greatly enhance a player's technique.

There are ten different stages in the game, including one hidden stage. They each have a different background, although the backgrounds do not affect the gameplay. and Each stage has a different inhabitant. 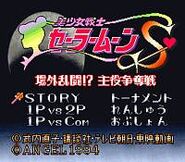 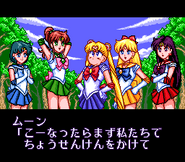 Starting screen with the Senshi discussing choosing a new leader 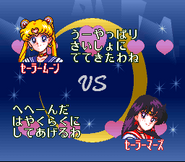 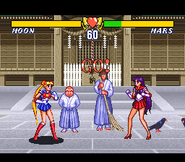 Sailor Moon and Sailor Mars begin their fight at the shrine 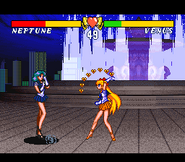 Retrieved from "https://sailormoon.fandom.com/wiki/Bishoujo_Senshi_Sailor_Moon_S:_Jougai_Rantou!%3F_Shuyaku_Soudatsusen?oldid=233782"
Community content is available under CC-BY-SA unless otherwise noted.