The game is based on the second season of Sailor Moon; Pretty Soldier Sailor Moon R. The player can control the other Inner-Senshi as well; as opposed to the original Game Boy game where only Usagi is a playable character.

Two modes are available to the player: "Story Mode" and/or "Arcade Mode".

In both modes, the game is complete after five stages. Some of the boss rooms start with a scene of Tuxedo Mask where the player will receive an extra life for picking up the rose item he drops. Other items the player can pick up include hearts, which refill some health, cake slices, which refill more health, and a tiara, which offers a power-up to the character's attacks.

Each stage in the game belongs to a certain character (characters in the second stage) and one boss. 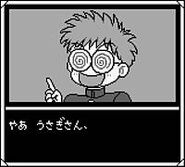 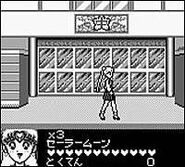 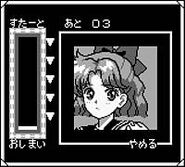 Add a photo to this gallery
Retrieved from "https://sailormoon.fandom.com/wiki/Bishoujo_Senshi_Sailor_Moon_R_(Game_Boy)?oldid=233783"
Community content is available under CC-BY-SA unless otherwise noted.