"Pretty Soldier Sailor Moon" (美少女戦士セーラームーン, Bishoujo Senshi Seeraa Muun) is a video game released for the Super Famicom in Japan by Angel Studios on August 27, 1993. The game was officially translated into French and released in France by Bandai S. A. in 1994. This version is just called Sailor Moon.

The game is a side-scrolling beat'em up type game, where the player goes through levels beating enemies using punches, kicks, or special attacks. Each Senshi has two special attacks that are performed by a combination of buttons. Five Inner Sailor Senshi is available as playable characters. The game supports one player and two-player cooperative mode.

There are five stages in the game, most of which are made up of two sub-stages. At the end of each stage is a boss fight. The enemies fought throughout the stages primarily include Akan, Garoben, Jiji, and Gamecen. To a lesser extent, Jumeau also appears, along with three original Youma characters designed by Naoko Takeuchi: HiraHira, MuchiMuchi, and GoroGoro.

If played on the Easy difficulty intended for beginner players, only the first two stages are playable and will then immediately cut to a non-animated image from the ending with only Princess Serenity and the Inner Senshi and without music playing, and the player will be asked to try the harder difficulty in order to move on. 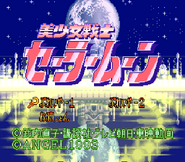 Cover artwork for the French version. 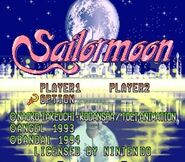 Title screen for the French version.
Add a photo to this gallery

Retrieved from "https://sailormoon.fandom.com/wiki/Bishoujo_Senshi_Sailor_Moon_(Super_Famicom)?oldid=233861"
Community content is available under CC-BY-SA unless otherwise noted.