Berthier is a member of the Black Moon Clan and the second youngest of the four Spectre Sisters. She accompanied Rubeus and her sisters to 20th-century Earth in order to locate Chibiusa and find the Silver Crystal.

Berthier has white hair that is braided into a ponytail and she also has blue eyes. She wears a sky blue swimsuit and matching thigh-high boots. She is the shortest sister out of all of the Spectre Sisters and the third oldest.

Berthier appeared in Act 16 of the manga as the architect of 002: Operation Remove. An expert dowser, her goal was to find Chibiusa and the Sailor Senshi with her dowsing ability, kill them and infiltrate Tokyo with Droids. She was thus challenged by Ami Mizuno to a chess match as a pretext for luring the Sailor Senshi to her. She managed to trap Sailor Mercury in a water current before she was killed by Sailor Moon's Moon Princess Halation. The water current - with Mercury in it - was then taken by Rubeus to Nemesis.

Berthier has the power of water. Her water is strong enough to trap or encase a person within it. 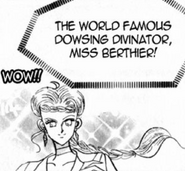 Retrieved from "https://sailormoon.fandom.com/wiki/Berthier_(manga)?oldid=239250"
Community content is available under CC-BY-SA unless otherwise noted.