"Aurora ♥ Wedding" was a very popular romantic action comedy manga series that was featured in chapter 12 of Codename: Sailor V.

It was written and illustrated by Marie Buraidaru and it had 110 volumes. The series was so popular that it had an anime based on it. There were also rumors about a Hollywood movie based on the series too.

The story was about ten sisters who run a bridal shop by day and defeat enemies as Guardians at night. Later on, the nine sisters get married and retire from their lives as Guardians. The only sister who doesn't get married is Linda Evangeligeli, a model who always gets saved by a man called Coattail Mask. Other characters included Linda's pet cat who always works hard at playing Cupid.

The series ended with Linda getting married to Coattail Mask.

Minako talking about the manga. 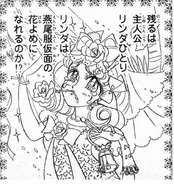 A picture of Linda.
Add a photo to this gallery

Retrieved from "https://sailormoon.fandom.com/wiki/Aurora_%E2%99%A5_Wedding?oldid=221842"
Community content is available under CC-BY-SA unless otherwise noted.