Artemis is Minako Aino's white guardian cat, as well as her adviser. He was the one who awoke Minako as Sailor V and has continued to watch over her ever since.

Artemis is the Greek goddess of the moon and the hunt. She was known as Diana in Roman Mythology.

Artemis is a white, short-haired cat with a yellow crescent moon on his forehead and green eyes.

Minako first meets Artemis while in a gymnastics class, where she accidentally lands on him, and he continued to observe her while she was at school. He finally introduced himself, much to her surprise, and told her she was a Sailor Guardian. He gave her a crescent compact and it transported them to Venus, where he showed her Magellan Castle and that Minako has a mission to fight. Before he could say more, Minako fainted from shock from the news. Later, Artemis warned Minako about the boy she had a crush on who was really a minion of the Dark Agency. Artemis threw Minako her Transformation Pen and gave her the command, allowing her to transform into Sailor V. After Minako killed Narcissus, she was upset, and Artemis comforted her, accepting they were partners now and he would help train her for whatever challenges arrive in the future. 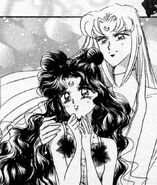 With Luna in their human forms

In the Materials Collection with blue eyes. 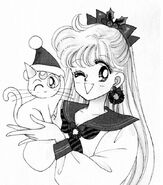 With Minako wearing a santa hat. 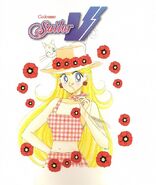 Back Cover art for Vol. 2, Shinsouban.