Aquatici and Veneti were a pair of droids that served as Saphir's minions.

Unlike the manga, they were not shapeless, wisps of smoke that had a masculine appearance, in fact, they appeared to be female and each of them had a theme color: Aquatici was blue (most likely due to the root word "aqua" in her name) and Veneti was red. They both have short dark red or blue hair and wear a dress of their respective colour that had a slit down one leg. They wear a light coloured top with one black and one coloured glove. Underneath their dress, they wear black trousers and heels of their respective colour. 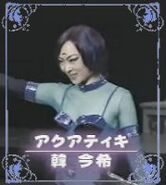 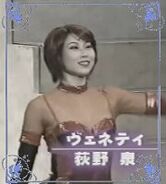 Aquatici and Veneti with Saphir.

Aquatici and Calaveras in disguise.

Petz, Esmerause and Veneti in disguise
Add a photo to this gallery
Black Moon Clan

Retrieved from "https://sailormoon.fandom.com/wiki/Aquatici_and_Veneti_(Sera_Myu)?oldid=218740"
Community content is available under CC-BY-SA unless otherwise noted.