Start a Wiki
"I am the Pretty Guardian who fights for Love and Intellgance. I am Sailor Mercury! Douse yourself in water and repent!"
— Sailor Mercury's stock introduction

Ami Mizuno (水野 亜美, Mizuno Ami) is one of the five original Inner Sailor Guardians of the Solar System and was the second Sailor Guardian introduced. Her Sailor Guardian identity is Sailor Mercury (セーラーマーキュリー, Seeraa Maakyurii) and her powers are based around water and ice, as well as intelligence and computers.

Ami Mizuno means "water field at the next rank".

Naoko Takeuchi included many occultist arts to finely detail each character. For Ami, these things include:

Ami Mizuno is a teenage girl who has short, dark blue hair that reaches her neck, and blue eyes. She stands at about 157cm or 5 feet 2 inches. At times, Ami will be seen wearing reading glasses.

Like Usagi, she wears a standard Azabu Juban school uniform.

Sailor Mercury has short blue hair and wears a sailor uniform, with a blue skirt and light blue ribbon on her chest and another one on the back of her skirt. Her sailor uniform distinctly does not have padded shoulder sleeves like her teammates. She has blue knee-high boots with short heels, as well as white elbow-length gloves, with blue on the ends, and wears blue stud earrings - three in her left ear and one in her right. Just like the other Sailor Senshi, she wears a tiara on her forehead, with a stone of her signature color (blue in Sailor Mercury's case) in the center of it.

A notable change to Sailor Mercury's Sailor Senshi uniform is the three-ribbed shoulder pads. These were added to her design to make all the Sailor Guardians' costumes more uniform. This is the only change that was made when the Sailor Moon manga was being adapted into the anime.

As Super Sailor Mercury, her choker had a yellow star with a blue gemstone in the center attached to it, the center of her front bow was a heart, the bottom of the shoulder pads was translucent, her earrings were three blue studs, the back waist bow was enlarged and lengthened.

Her favorite subjects were math and science. She also has a secret love of romance novels and pop culture but is embarrassed to say it.

Ami is introduced in Act 2, appearing on Luna's computer; listing her name, birthday, zodiac sign, blood type, and age. The next day, everyone is talking about how Ami Mizuno once again finished at the top of the national exams; speculating that she isn't human and that her I.Q. is 300. Umino mentions that the reason she is so smart is probably due to her attending a private cram school, the Crystal Seminar. Umino also mentions that her mother is a doctor. Naru mentions that she must be smart and rich, but Yumiko remarks that she's cold has no friends and that all she ever does is study.

On her way home, while fretting about her low test scores, Usagi notices Ami walking home when Luna jumps on top of Ami's head. Ami pets Luna, and Usagi sees that she is not a bad person. Usagi calls Luna over and asks if she's all right. Ami says that when Luna suddenly fell from the sky, she thought it was an angel, but becomes embarrassed after saying so. Usagi then introduces herself and takes Ami to Game Center Crown. While there, Ami plays the Sailor V Game and gets the highest score. After she puts her name on the ranking list, a pen falls out of the machine. After that, Ami checks the clock and realizes that she has to go to cram school, the Crystal Seminar.

After learning the true message on the disk, Usagi spots Ami and the other students from the Crystal Seminar, only to realize that they have been brainwashed. Usagi uses the disguise pen to transform into a doctor's attire and rushes to save her. When the teacher reveals herself to be a youma, she transforms into Sailor Moon, but the youma grabs hold of Ami and scold her for not using the disk to study. Ami in return tells the teacher that you study by your initiative. The youma decides to kill her, but her pen glows and the symbol of Mercury appears on her forehead. Ami then transforms into Sailor Mercury for the first time; enveloping everyone in a freezing mist. After the youma is defeated, the fog clears up with Ami in her Sailor Uniform Luna tells her that she is Sailor Mercury; a fellow Sailor Senshi that they have been looking for.

Ami can transform into Sailor Mercury by saying "Mercury Power, Make Up!". Her attacks are centered around snow, ice, water, sleet, and mist.

Ami wasn't included in the original proposal for a hypothetical Codename: Sailor V anime, which instead featured Minako's very similar-looking best friend, Hikaru Sorano. She was present, however, by the time the concept was expanded to center on Sailor Moon.

Naoko Takeuchi designed Ami as the "team brain," giving her genius-level intelligence to create the impression that she was not quite human. The character was originally intended to be a cyborg with an accelerator. One possible storyline involved her losing an arm or being injured in some other way and dying from it, but Takeuchi's editor objected, and Ami became a fully human character. 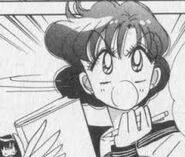 The Inner Sailor Senshi on the cover of volume 10 of the Kanzenban manga.

The artwork of Sailor Mercury was seen on Volume 2 of the shinsouban edition of the manga.

Retrieved from "https://sailormoon.fandom.com/wiki/Ami_Mizuno_/_Sailor_Mercury_(manga)?oldid=231216"
Community content is available under CC-BY-SA unless otherwise noted.