Her profile is basically the same as the one she has in the manga. Sailor Mercury is the first member of the Sailor Team to be discovered by Usagi Tsukino, third to be awakened by the Moon Cats, and serves as the "brains" of the group. Her powers are associated with phases of water and ice, and she can use her supercomputer to quickly analyze a foe in battle. Most of her powers are strategic rather than offensive, and she possesses various pieces of computerized equipment to help her study the enemy.

Communicating with Central Control, Luna receives information on a new student at Usagi's school who may be connected to the Dark Kingdom. During school Umino tells Usagi and her friends about Ami and ideas begin to be thrown around about how smart she is and why she transferred to their school. On her way home, Ami is attacked by Luna who takes the chance to observe her and Usagi introduces herself and invites Ami to come with her to the game arcade. There Ami proves to be an expert at the Sailor V game which she claims to have never played. When she leaves she drops a disk which Motoki finds and gives to Usagi. She and Luna inspect the disk and find brainwashing software on it that mentions Queen Beryl, leading them to assume Ami is working with the Dark Kingdom. When Usagi sneaks into the school to confront Ami, she discovers everyone to be brainwashed by a Youma named Garoben . She proceeds to transform into Sailor Moon and comes under fire by the youma. Ami is then attacked by the Youma which shows to Usagi and Luna that she is not working for the Dark Kingdom. While in the grasp of Garoben, the symbol of Mercury appears on her forehead indicating that Ami is Sailor Mercury. Luna gives Ami a Transformation Pen and she then transforms into Sailor Mercury by saying the phrase "Mercury Power, Make Up". 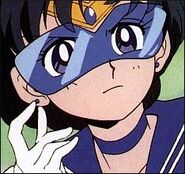 Smchar mercury009.jpg
Add a photo to this gallery
Sailor Senshi

Retrieved from "https://sailormoon.fandom.com/wiki/Sailor_Mercury_(anime)?oldid=40214"
Community content is available under CC-BY-SA unless otherwise noted.