Ami Mizuno (水野 亜美, Mizuno Ami) is one of the five original Inner Sailor Guardians of the Solar System and was the second Sailor Guardian introduced. Her sailor guardian identity is Sailor Mercury (セーラーマーキュリー, Seeraa Maakyuriii). Her powers are based around water and ice, as well as intelligence and computers.

Mizuno: The kanji for Mizu (水) translates to "water" while the kanji for no (野) translates to "field" or "civilian". The syllable no (の) also indicates possession, so while the literal translation of her family name could be "water field" or "water civilian", others may translate it as "of the water." Also, Mizuno is a common surname in Japan.

Her name completely in hiragana/katakana would be "みずのあみ" (Mizuno Ami).

Ami Mizuno looks similar to her appearances in the Manga and Anime. She has short, dark blue hair and dark brown eyes.

Sailor Mercury's appearance is similar to her manga and anime appearances.

In the older musicals, her uniform and the overall color were much darker. Her bow is sometimes dark purple and her underskirt is a lighter blue. Her boots are sometimes wellingtons with extensions to make them look like her original boots. Her shoulder pads are also blue in early musicals. When her boots are more similar to her manga and anime ones, they either have the original white trimming or two golden lines.

The second version was essentially faithful to her "Super" version in the manga and anime. At first, her front bow, back bow, and glove fittings were light blue, and her collar, boots, and choker were cerulean. Her skirt had two layers, the top one cerulean and the bottom one light blue. Later versions of the costume changed her glove fittings to cerulean instead of light blue. Her choker ornament was a golden star with a cerulean circle and the Mercury symbol in the center. The brooch on her front bow was a heart-shaped blue gem ringed in gold. Her earrings were three large blue studs.

Sailor Mercury had one image song, "Drive Me The Mercury."

Miyabi Matsura as Ami Mizuno.
Add a photo to this gallery 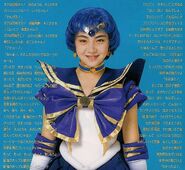 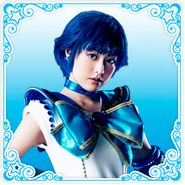 Momoyo Koyama as Sailor Mercury
Add a photo to this gallery

Retrieved from "https://sailormoon.fandom.com/wiki/Ami_Mizuno_/_Sailor_Mercury_(Sera_Myu)?oldid=225527"
Community content is available under CC-BY-SA unless otherwise noted.