The "Amazon Trio" are three of the main followers of Zirconia, and chief villains in the first half of the Sailor Moon SuperS anime and the beginning of the fourth manga arc, the Dream arc. The Amazon Trio is composed of Tiger's Eye, Hawk's Eye, and Fish Eye.

Their role in the manga was more brief than the anime. All three were animals and turned into human forms by PallaPalla. The Trio had the ability to freely transform from their animal form into human form and the other way around. Each one was sent to destroy one of the Sailor Senshi while the Senshi were unable to transform. Unlike in the anime, the Trio were aware of the Guardian Senshi's true identities. Fish Eye went after Ami, Hawk's Eye went after Makoto, and Tiger's Eye went after Rei. They were destroyed after their targets had gained their super forms and used their new attacks on them.

The Trio seemed to be more feminine and flamboyant in the manga. One example of this is Hawk's Eye disguised in womens clothes at the store he worked at.

The Amazon Trio were originally a tiger, a hawk, and a fish, but were turned human by Zirconia.

Tiger's Eye, Hawk's Eye, and Fish Eye were instructed by Zirconia to find the person whose dreams Pegasus was hiding in and by doing so, capture Pegasus. They would often look through Zircon's pictures of possible candidates in a bar at their circus tent, and choose one. One of them would go after their chosen victim, and extract their dream mirror and look into it to see if Pegasus was in there. Occasionally they would try to trap Pegasus, but fail. Whenever the Sailor Guardians came to stop them, they would send a Lemures after them, summoning them from their shadows.

Until Zirconia told them, they were unaware that they were once a tiger, a hawk, and a fish turned human by the power of a magic orb. They were also unaware of the existence of Queen Nehellenia until she told them and she spoke to them through the front of her robe, telling them that if they failed to catch Pegasus they would soon return to their original forms permanently.

Fish Eye discovered that Usagi was Sailor Moon and Chibiusa was the holder of Pegasus but when he told Zirconia he knew who it was, Zirconia assumed it to be Usagi and sent Hawk's Eye after her. After Fish Eye and Tiger's Eye left, Zirconia decided that their usefulness had ended. He summoned a Lemures named Mr. Magic Pierrot, which destroyed Usagi's dream mirror and aimed a spade attack at Fish Eye but Hawk's Eye jumped in front of him and took the hit.

Tiger's Eye and Fish Eye gave up the power that made them human to restore Usagi's dream mirror and she transformed into Sailor Moon and destroyed Mr. Magic Pierrot. Tiger's Eye and Fish Eye died from giving up their power and all three turned back into a hawk, a tiger, and a fish. Pegasus revived them and turned them back into humans, and gave them their own dream mirrors. They were last seen turning into energy balls and being taken to a crystal forest in Elysion by Pegasus. 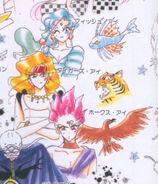 The trio gain Dream Mirrors
Add a photo to this gallery

Retrieved from "https://sailormoon.fandom.com/wiki/Amazon_Trio?oldid=237864"
Community content is available under CC-BY-SA unless otherwise noted.