Amaderasu is the 7th Cardian that Ail and An sent to gather energy for the Makai Tree. She appeared in episode 7 of Sailor Moon R.

Amaderasu's name is a play on the goddess Amaterasu from the Shinto religion.

She had a humanoid appearance and the power to fly, trap people inside bubbles, and shoot thin strings at people to drain their energy. She could also simply blast powerful beams of energy to attack.

When the energy from children wasn't sufficient enough for the Hell Tree, Ail and An decided to target babies instead. They summoned Amaderasu to attack a daycare center. Amaderasu appeared from the sun and constricted a group of babies in her strings to drain their energy. Later, Amaderasu targeted more babies and attempted to steal their energy and entrap them inside her bubbles but the Sailor Guardians fought her. After dodging Sailor Venus' Crescent Beam, Amaderasu blasted Sailor Mars, Sailor Jupiter, and Venus with a beam of light, knocking them out. She then drained Sailor Mercury and Sailor Moon's energy until the Moonlight Knight appeared and sliced Amaderasu's face with his rose. Sailor Mercury then used a new attack: Shabon Spray Freezing, and froze Amaderasu solid. Sailor Moon then killed Amaderasu with her scepter.

Amaderasu is portrayed as one of the more evil Cardians, due to the fact that she targets infants over other humans. 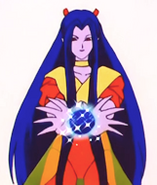 Retrieved from "https://sailormoon.fandom.com/wiki/Amaderasu?oldid=238166"
Community content is available under CC-BY-SA unless otherwise noted.