This page is for the seventh episode of Sailor Moon Crystal. For the seventh chapter of the manga, please see Act 7 Mamoru Chiba - Tuxedo Mask -.

Usagi learns from Mamoru that he has no memory of his childhood past, but that finding the Silver Crystal will help him somehow. Usagi is determined to help him regain his memories and her genuine romantic affections for him begin to grow stronger and closer now.

Usagi awoke to find herself in Mamoru's apartment. Seeing the mask and cape on the couch, she realized that he was Tuxedo Mask. He told her his story of how he lost his memories in an accident on his sixth birthday that claimed his parents and how he was having recurring dreams of a woman who told him to find the Silver Crystal, believing that it would help him restore his memories. He found himself sleepwalking in a Tuxedo, trying to find the Crystal. Once he became aware of his own activities, he adopted the persona of Tuxedo Mask. Usagi finds herself letting her guard down and falling for him despite Luna's earlier warnings.

After seeing Sailor Moon's power, Queen Beryl suspects that she might be the key to finding the Silver Crystal. She uses energy obtained from humans in order to revive Queen Metalia, who claims that this is not enough. Queen Beryl reveals her own origin as someone who was drawn to the ruins of the Dark Kingdom where Queen Metalia had been sealed away, and that she herself had released the evil being. Queen Beryl tells to herself that she will not allow Metaria to get hold of the crystal that easily. Seeing that Zoisite has revived, she orders him to find Sailor Moon, telling him that she might know about the crystal.

Zoisite sells CDs in the name of ‘‘Rental Shop Dark’’ to brainwash people into finding Sailor Moon. Usagi notices that everyone in her class is behaving very strangely. Usagi and Ami inserts one of the CDs into the game machine in the arcade, but it is immediately ejected after it started destroying the machine. Later in the evening, brainwashed people gather in the streets, looking for Sailor Moon. She appears before them and uses Moon Healing Escalation to heal the crowd.

After the people left, she is attacked by Zoisite who captures her and easily defeats the Senshi and Tuxedo Mask before questioning her about the Silver Crystal. Angered by the fact that she has no idea, Zoisite tries to kill her using a large crystal, when, out of nowhere, a boomerang destroys the crystal. Before Zoisite could register what happened, the boomerang appears again, severely wounding him on the abdomen. A baffled Sailor Moon sees the weapon fly into the hand of a girl standing atop a building, whom she recognizes as the famous Sailor V herself with a white cat.

Mamoru as a child in his flashback 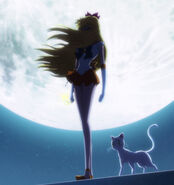 Retrieved from "https://sailormoon.fandom.com/wiki/Act_7_Mamoru_Chiba_-_Tuxedo_Mask_-_(episode)?oldid=227120"
Community content is available under CC-BY-SA unless otherwise noted.