This page is for the sixth episode of the series, Pretty Guardian Sailor Moon Crystal. For the sixth chapter of the manga, please see Act 6 Tuxedo Mask.

Tuxedo Mask reveals himself to the public, saying that he is a criminal who is trying to find the Legendary Silver Crystal. The Sailor Senshi and Luna start investigating, while the Dark Kingdom uses this opportunity to brainwash people in order to find the Crystal.

Following the previous battle, Luna gives Sailor Moon a new item, the Moon Stick, and tells her that she is to protect the Legendary Silver Crystal and the Moon Princess, and is the leader of the Sailor Guardians.

The next morning, Mamoru wakes up in his apartment after having a recurring dream: As soldiers run for the attack, a woman with long hair is seen, shouting the name of the Silver Crystal. He makes sure to find the crystal as soon as possible.

At the Tsukino house, Ikuko watches a news report on television, where the latest news is about Tuxedo Mask, revealing himself to be a criminal in search for the Silver Crystal. Luna ponders on this mystery.

Usagi meets Ami and Makoto on her way to school and accidentally bumps into Mamoru as she goes. Usagi recognizes him, while he tells her to be more careful. As he leaves, Makoto notices Usagi blushing and quickly teases her for liking him. Ami recognizes from Mamoru’s uniform that he must be a student at the prestigious Moto Azabu High School.

Elsewhere, Kunzite and Zoisite watch the current events in Queen Beryl's crystal ball. Kunzite is amused by how all humanity is now scrambling for the Silver Crystal. Queen Beryl reminds him that the crystal belongs to them and that they still don’t have enough human energy for their great ruler. An injured Nephrite stumbles in and asks for one more chance. Zoisite, ignoring him, promises to obtain the Silver Crystal and the energy all at once.

Luna and the girls hold a meeting at Game Center Crown, where they discuss the current events. Everyone is confused about whether Tuxedo Mask is the enemy. When questioned about the Silver Crystal, she says that it has enough power to destroy a planet. It is the destiny of the Sailor Guardians to protect both the Silver Crystal and the Moon Princess, who comes from the Moon Kingdom. Luna reveals that she was sent from the Moon for this very reason. After this, Usagi notices that a weapon in the Sailor V game looks like the Moon Stick. She suddenly hears Sailor V encouraging her from the game. Hiding her surprise, she wonders aloud if Sailor V could be one of their allies.

Meanwhile, Zoisite puts his plan into action. Disguised as a woman and calling himself Dr. Isono, he appears on a TV talk show. He says that the Silver Crystal has magical powers and can give eternal life. Secretly, he releases evil energy from the screens and televisions, brainwashing people. Soon everyone in Tokyo is frantically searching for the crystal. When Usagi comes back home, she finds her mother frantically searching for the Silver Crystal. Luna calls Ami through Usagi's laptop and tells them to rejoin at the arcade.

At the arcade, Luna presses buttons in sequential order on the Sailor V game, and the machine slides back to reveal a staircase underneath which leads to a highly advanced base. She explains that this is a secret base that she uses to research the enemy. They discover that the evil energy is being concentrated at one spot. Ami realizes that the negative energy is being sent from the T.V. station. Luna accuses Tuxedo Mask of being a part of this plan and warns Usagi of his trick. Usagi, angered by this statement, storms out of the arcade, crying.

Seeing that the humans are not able to locate the Silver Crystal, Zoisite decides to drain their energy instead. He presses a button and begins sucking energy from people through their TV screens. While he watches, he is confronted by Luna, Ami, Rei and Makoto and reveals his true form. Alarmed, the three girls transform.

Meanwhile, Usagi feels her energy being drained away as she walks down the street. She collapses but is immediately caught by Tuxedo Mask. She feels her strength coming back and when she wakes up Tuxedo Mask is holding her. He confesses that this mess is all his fault and that he needed help to find the Legendary Silver Crystal because he does not have any special abilities like hers. Usagi tells him that she too is powerless at times, and senses her three best friends in danger.

Meanwhile, the rest of the Sailor Guardians are attacking Zoisite with their powers. He is briefly subdued by Mercury's attack but suddenly attacks the Sailor Guardians with his powers. They lie injured when a portal opens in the sky and Queen Beryl descends down. She uses her own powers to slowly destroy the area, while Luna frantically looks for Usagi.

Usagi is hesitant to transform in front of the Tuxedo Mask. but he tells Usagi that she is the only one who can save everyone and that she must transform into Sailor Moon. Usagi is shocked that he now knows her identity as a Sailor Guardian, but has no time to hesitate and transforms. Sailor Moon reaches the tower where the enemy is. She remembers Sailor V using the Moon Stick-like weapon in the game and uses Moon Healing Escalation at Beryl. Zoisite, however, shields the queen and instead gets the full blast of the attack. Clearly defeated, Queen Beryl carries the hurt and weakened Zoisite and vanishes into the sky, while Sailor Moon flies across the sky, healing the brainwashed people with the Moon Stick.

Sailor Moon collapses from exhaustion and Tuxedo Mask holds her. As he takes her up, his pocket watch falls on her lap. The two of them are secretly watched by Sailor V and a white cat from the top of a building.

Usagi sees a recurring dream of a man and wakes up to find herself in a strange room. She sees the broken pocket watch in her lap, thinking it might belong to Tuxedo Mask. Then Mamoru enters the room. Usagi after a few moments realizes that Mamoru Chiba, is in fact, Tuxedo Mask.

Usagi falls after bumping into Mamoru. 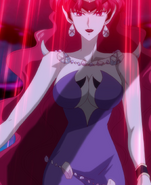 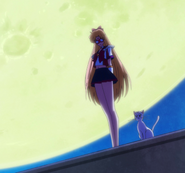 Usagi realizes that Mamoru is in fact, Tuxedo Mask.
Add a photo to this gallery

Retrieved from "https://sailormoon.fandom.com/wiki/Act_6_Tuxedo_Mask_(episode)?oldid=227792"
Community content is available under CC-BY-SA unless otherwise noted.