This page is for the fourth episode of Sailor Moon Crystal. For the fourth chapter of the manga, please see Act 4 Masquerade Dance Party.

An embassy party is being held by the Kingdom of D, the world's largest producers of Diamonds, to unveil their national treasure for the first time in public. Luna and the Sailor Guardian suspect that the treasure could be the LegendarySilver Crystal and must investigate; however, the Dark Kingdom intends to uncover this as well.

Luna finds out information about the Sailor Guardians and Mamoru Chiba. Little is known about him, and Luna ponders whether he is a friend or foe.

The next morning, Usagi's mom is reading the newspaper. On the front page, Sailor Moon solving the "Demon Bus" mystery is featured. She also sees a report of Princess D from the D Kingdom arriving to show their national treasure.

Usagi runs by, late for school. On the way, she sees a lot of policemen on the street regulating the traffic but has no time to find out what's happening. Arriving at school, fearing a scolding from the teacher, Usagi sees Naru who tells her the teacher has not arrived yet. Naru tells her that the cops are on the street for security as Princess D from the D Kingdom, known for their diamonds, is visiting Tokyo. A ball is going to be held at the embassy in her honor.

After school, Usagi goes to the arcade for the Sailor Guardians meeting, arriving late because she had to stay after school for failing a test. Ami had been teaching Rei how to play the Sailor V game. Ami is glad Usagi made it, but Rei complains about her tardiness.

Rei asks Luna what their origins are, and Ami asks for more information about the enemy. Luna does not know much about the enemy. However, she tells the girls they were not chosen to fight the enemy but rather chosen to protect the princess. The princess can't be found because she was sealed away, probably because she has the Legendary Silver Crystal with her. Usagi is playing the Sailor V game and is not paying attention. Once the other two Guardians are found, the princess will be unsealed. The information they need will come from their memories, especially Usagi's. She was the first Guardia, and the leader.

Motoki, the arcade worker, comes by and asks Usagi about the cops. She tells him about Princess D, and just then Umino shows up with a photo of the princess. With her large glasses, the girls think the princess looks like Umino. But, Usagi still wants to go to the ball. Rei is hesitant, sensing trouble.

Back in the Dark Kingdom, while Jediete is angrily recovering from his fight with the Sailor Guardians, Nephrite learns of the D Kingdom treasure and thinks it may be connected to the Silver Crystal. Queen Beryl tells him to find the Crystal, and the Dark Kingdom will rule the universe.

At Usagi's house, her dad is getting ready for the embassy ball. Usagi asks to come along, but her dad tells her to watch it on TV and leaves. Usagi decides to investigate and uses her Disguise Pen to transform into a princess.

Ami, Rei, and Luna go along with Usagi to the ball. However, pets were not allowed, so Luna had to stay behind. Ami and Rei are looking for the princess while Usagi wanders around dreaming of joining the dance when someone accidentally spills a drink on her dress. She goes off to find a sink to rinse off her dress in and drops her handkerchief embroidered with her name, which is picked up by Mamoru.

Standing by herself in the balcony, Usagi looks sadly into the crowd. Dressed up like a beautiful princess, but all alone. Then, Tuxedo Mask comes and asks Usagi to dance with him. Mesmerized by him, Usagi agrees. Usagi recognizes her dance partner as Tuxedo Mask and breathlessly whirls with him until Luna calls out to her. After turning towards Luna, Usagi looks back and Tuxedo Mask is gone. Luna explains they've found Princess D, however, she is not the princess they are looking for.

Princess D prepares to show the D Kingdom treasure to the assembly, wishing she were as important as the treasure seemed to be to the crowd. While leading Princess D to her room, the attendant shows herself as Nephrite in disguise, and his shadow takes over Princess D's body, to get hold of the treasure and the energy from the crowd. The possessed princess runs with the treasure towards the balcony and Usagi tries to catch her. However, Princess D flings her to the side and over the railing. Tuxedo Mask reaches out and barely grasps Usagi's wrist. Before he can pull her up, he loses his grip on the railing, and they both fall. Luna tells Usagi to use her pen, which she takes out and turns into an umbrella that floats them safely to the ground. Tuxedo Mask thanks Usagi and runs off.

Usagi transforms into Sailor Moon, but the transformation is suddenly interrupted as she realizes that she is no longer wearing her tiara, which had been destroyed by Sailor Mars’s attack on Jadeite the previous day. Her body begins to feel warm, and a new tiara appears.

The guests are being sucked into darkness by Princess D and Sailor Mars' "Akuryo Taisan" attack does nothing to Nephrite’s shadow. Luna tells Sailor Moon to reflect the moonlight on the shadow using her tiara. Sailor Moon reflects the moonlight off the jewel in her new tiara, which destroys the shadow of Nephrite. For a brief moment, all the Shitennou appear, telling the Sailor Guardians to stay out of the Dark Kingdom’s way before disappearing.

As everyone begins to stir, Princess D does not have her glasses, and the Guardians see how beautiful she is. Princess D quickly replaces the glasses, however, because without them she can't see a thing. Usagi wonders whether Umino would look the same. Princess D then presents the treasure, which turns out to be a 2000-carat Diamond statue of the Princess herself.

A tired Sailor Moon is sleeping on a bench in the balcony. Tuxedo Mask kisses her, she feels like it is something that happened from a long time ago.

Luna immediately shows up and tells Tuxedo Mask to leave Usagi alone, asking if he is a friend or foe. Because all he knows is that he and the soldiers are both after the Silver Crystal, he tells Luna that they might be enemies.

The episode ends with a brown-haired girl running in the street after she senses an approaching storm.

*The original Japanese dub didn't have Sailor Moon say her Moon Twilight Flash attack and instead say her "In the Name of the Moon, I'll punish you" catchphrase. However, the Viz Media English dub had Sailor Moon say the attack. 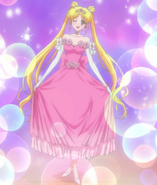 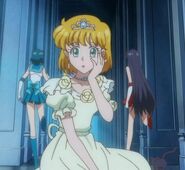 Makoto's eyes
Add a photo to this gallery

Retrieved from "https://sailormoon.fandom.com/wiki/Act_4_Masquerade_Dance_Party_(episode)?oldid=221256"
Community content is available under CC-BY-SA unless otherwise noted.