This page is for the third episode of Sailor Moon Crystal. For the third chapter of the manga, please see Act 3 Rei - Sailor Mars.

A young woman named Rei Hino possesses exceptionally strong spiritual powers and attracts attention to mothers who angrily accuse her as the one responsible for abducting their children due to her ability to detect supernatural activity. Usagi, however, is intrigued by the young priestess's beauty and goes to meet her. Luna suspects that Rei may be the long-lost princess or even the third Sailor Senshi.

In the Dark Kingdom, Jadeite is being rebuked by Queen Beryl for his failures. The other warriors, Nephrite and Zoisite, criticize him as well. The commanders' question Beryl as to what the Legendary Silver Crystal is. She informs them it is a source of endless energy, the one who has it controls the universe. She gives Jadeite one last chance to redeem himself.

A beautiful young shine priestess named Rei meditates before a fire, sensing something evil is coming. She has a young friend named Mii who spends time with her in the evenings waiting for the bus.

At the arcade, Luna talks to Ami while the Sailor V game distracts Usagi. Luna tells Ami of their need to find the princess and the Legendary Silver Crystal. After Usagi wins a level of the game, a prize of watches comes out of the machine, which Luna informs them as being remote communicators for them to use.

While on the bus, Ami and Usagi first see Rei. Usagi is mesmerized by her and follows her to Sendai Hill, but is attacked by a group of crows, and Rei feels a supernatural presence coming from Usagi. After she realizes her mistake; she apologizes to Usagi, who tries to make friends with her. Mii’s mother comes to the temple and informs her that Mii has disappeared. Rei suspects the demon bus: if you get on the bus on the Sendaizakaue route when it pulls up to the Hikawa Shrine at 6:00pm, you’re never heard from again. It is later revealed that Jadeite has been kidnapping people to lure the two Sailor Guardians into his trap.

At school, people talk about the vanishing buses, which Luna thinks could be the enemy. She urges Usagi to check out the temple again and they take the bus up to Sendai Hill. On the bus, Usagi and Luna run into Mamoru again, who hears Luna speaking.

At Sendai Hill, Mii’s mother and her friends demand that Rei use her abilities to find Mii and accuses her of having something to do with the child’s disappearance when she refuses. Usagi immediately jumps in to defend her. Rei, fed up, yells at the parents to leave the shrine and admits to Usagi later that people have always acted coldly towards her because of her unique powers.

Rei once again meditates before her fire in the shrine. In the fire, she sees the enemy grabbing Usagi and senses the danger. This leads her to run for the bus, where she realizes the driver is the enemy from her vision. Jadeite attacks her and she falls unconscious.

As Usagi and Luna walk down the street, they see the bus pass by, with Rei unconscious in one of the windows. Usagi transforms into a stewardess using the Disguise Pen and grabs onto the disappearing bus. Luna falls off and lands in Tuxedo Mask's arms. Usagi disappears with the bus, leaving Tuxedo Mask and Luna behind.

Usagi is in the Dark Kingdom, but can still talk to Luna and Ami through their communicators. Luna tells Usagi to transform and Ami transforms while Luna teleports her to Usagi's position.

Sailor Mercury attacks Jadeite, which turns out to not affect him. Sailor Moon and Sailor Mercury are rendered powerless as Jadeite freezes their hands, but he is immediately attacked by Rei. He freezes her hand too, but she easily destroys its powers. At that moment, the symbol of Mars appears on her forehead, and Luna realizes who she is. Luna throws her a pen and she tells her to transform and that she has to hurry too. She does so and transforms into the Guardian of Fire and Passion, Sailor Mars!

Back at the shrine, Mii is reunited with her mother, and so are the other victims. Usagi, Ami, and Luna officially welcome Rei to the Sailor Team, who is happy that she has finally gained new friends. 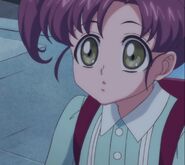 Retrieved from "https://sailormoon.fandom.com/wiki/Act_3_Rei_-_Sailor_Mars_(episode)?oldid=226152"
Community content is available under CC-BY-SA unless otherwise noted.