Act 21 - Complication, Nemesis is the twenty-first episode of the second anime series. It premiered in Japan on May 2, 2015.

Sailor Moon has been taken captive by the envious Prince Demande, leaving Tuxedo Mask deeply worried about her safety. A distraught Chibiusa blames herself for all that has happened since she had secretly taken the mighty Silver Crystal of the future. But will she be able to do something to reverse all of the damage she has unwittingly done?

Sailor Moon has been abducted by Prince Demande, leaving the rest of the group shocked. Sailor Venus screams out in anguish. The Moon Rod falls to the ground, cracked and broken.

Usagi sees a dream where Mamoru is walking with another woman. She turns back, and Usagi realizes that it is Chibiusa, who seems to have grown to her teens. She smiles wickedly, and both of them run away, leaving Usagi behind as she calls for them. Usagi wakes up from the dream to find herself wearing a gown in an unknown room. She is relieved to find the Crystal Star Brooch on the bed, intact, and survey the room when she finds a hologram of Neo-Queen Serenity; her very own future self. Prince Demande appears and welcomes her to the Black Moon Castle on Nemesis. Using his dark powers, he forces Usagi to sit on a chair against her will. He is surprised that though she was hit by his evil eye attack, she woke up quickly, something which could be done only by someone who has the power of the Legendary Silver Crystal. He reveals that he attacked Crystal Tokyo to prove that the Legendary Silver Crystal is not invincible. He and his comrades did not like Earth's new society where long life and infinite power prevailed. Preparing to separate from the rest of humanity, they were confronted by Wiseman, who told them to obtain the Black Crystal on Nemesis. Anyone who has power over the Black Crystal will be able to control every world and dimension. The cause of the explosion in Crystal Tokyo was revealed: A part of the Black Crystal fell into Crystal Tokyo, causing the disaster, and stuck itself on the ground. It is, in fact, the black megalith seen earlier. Prince Demande reveals their actual plan Operation: Replay, to go back to the past and prevent the Silver Millennium from happening, while turning the Earth into a Black Moon society.

When Crystal Tokyo was decimated, Prince Demande came down to see a small girl crying. She bears a resemblance to Chibiusa. He tried to kill her, when Neo-Queen Serenity came running, mistaking the girl for her daughter. That was the first time the Queen had come out of the palace, and it was unexpected even for Demande. He was immediately attracted to her, and tried to subjugate her using his Evil Eye attack, but the Legendary Silver Crystal repelled the dark power, and encased her in crystal. He had never forgotten her after that, desiring her even more. He had finally succeeded by capturing Usagi, who was the Queen's younger self. He utters the Queen's name once more, and kisses Usagi. But she pushes him away in anger and tries to transform into Sailor Moon, but it does not work, much to her despair. Prince Demande reveals that the planet is filled with the Black Crystal's power, and that it absorbs every other power, even that of the Legendary Silver Crystal.

Back in the Crystal Palace, King Endymion discovers from his computers that Nemesis had disappeared from its orbit again. Sailor Venus is tensed by the fact that only the Legendary Silver Crystal could save their friends on Nemesis, but the Queen, who is the only one who can use it, is currently unconscious. Luna brings up the option of Chibiusa using the Crystal, since she is a member of the Royal Family. But the King reveals that she has no power or ability of any sort. He reveals that she is actually 900 years old, despite her youthful, childlike appearance. He believes that her power will awaken sooner or later.

He reveals that they had a battle with the Black Moon a few centuries ago. Crystal Tokyo was at peace, until an insane ruler named Phantom appeared, bringing crime and murder along with him. He had the same upside down crescent moon symbol used by the Black Moon clan on his forehead. He was captured, and the Queen banished him to Nemesis, blocking the planet off. It was then that rebels by the name of Black Moon appeared. Looking at the cracked Moon Rod in his hand, Tuxedo Mask vows to save Usagi at any cost.

Usagi now feels sad by the fact that she had run away from Mamoru the last time they were together, and they might never be able to fix their relationship anymore. She realizes the doubt she had whenever he was affectionate to Chibiusa. But she understands that she is Neo Queen Serenity, and that it is her duty to protect Earth and everyone one in it. She realizes that Ami, Rei and Makoto could be here on Nemesis.

In a dark dingy place, Ami, Rei and Makoto wake up, surprised to see each other and revealing that they heard Usagi's voice. They try to transform, but nothing happens. They become engulfed in evil power and they black out once more. Back in the palace, Usagi clearly realizes that her friends are in danger. Prince Demande announces that he no longer need the captured Guardians, while Wiseman watches Chibiusa from his crystal ball.

Chibusa remembers the time when her father would tell her stories of Sailor Moon. But she was always sad by the fact that unlike the Queen, she had no power. Children used to bully and make fun of her due to her inability to use the Legendary Silver Crystal. She went to the palace, to the room where the Silver Crystal was being kept, and took it, when the Queen entered the room. Chibiusa hid herself, and the Queen seeing that the Crystal was missing, ran out of the palace. Chibiusa then hears the sound of an explosion, and runs out to see the Queen encased in quartz crystal; clearly in a deep slumber. She blames herself for everything that happened in her kingdom. She also remembers the day she met Sailor Pluto. She had gone to the very back of the palace, when she came upon a magnificent door. She opened it to find Sailor Pluto, who immediately greeted her. Seeing her sad face, Sailor Pluto tells her of a simple spell, Abracadabra Pon, that would make things even more fun if she is ever feeling down. Chibiusa began to be her good friend after that.

Chibiusa makes up her mind to go meet Sailor Pluto. But she finds her gladly talking with King Endymion, she feels that she doesn't really belong anywhere, and walks on farther. Sailor Pluto finds the Space-Time key on the ground, and becomes worried. Chibiusa tries to go back, but she realizes that she does not have the key with her anymore. Wiseman materializes before her and assures her that he could help her and he is all that she needs. He brings her to his control and holds out his hand, telling her to come with him. A black upside-down crescent moon symbol appears on her forehead, and she takes his hand.

Changes From the Original Anime

Mamoru and an older Chibiusa

A view of Crystal Tokyo 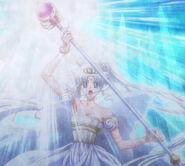 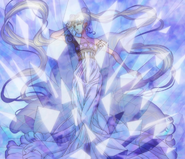 Retrieved from "https://sailormoon.fandom.com/wiki/Act_21_Complication_-_Nemesis_(episode)?oldid=211458"
Community content is available under CC-BY-SA unless otherwise noted.