Sailor Moon is surprised to see the man who bears an unmistakable resemblance to Tuxedo Mask, and is even more surprised when Chibiusa addresses the man as her father. She tries to hug him but seemingly goes through him. He appreciates her for making a wise decision and going back to the past. He welcomes the group to 30th century Crystal Tokyo.

He admits that he had no idea that they would have to face a battle the moment they set foot in the 30th century. Sailor Moon notices that he casts no reflection on the crystalline walls. He admits that his real body is lying elsewhere unconscious, and now he is speaking to them in a spirit-like form. He introduces himself as King Endymion, and assures a surprised Tuxedo Mask that he is in fact, his future self. He asks Chibiusa to introduce properly, which she does as Usagi Small Lady Serenity; daughter of Neo Queen Serenity and King Endymion, and the first princess of the Silver Millennium. He reveals to Sailor Moon and Tuxedo Mask that Chibiusa is their daughter, much to their shock and embarrassment. Sailor Venus realizes that Neo-Queen Serenity is, in fact, Sailor Moon's thirtieth-century future self.

Luna questions the king as to why the mighty Silver Crystal would be enveloping the queen like that. He replies that the queen had never even left the castle, except for one day when she left suddenly in a panic. That was when a tremendous explosion occurred. Except for the Crystal Palace, everything in the vicinity was turned to dust. During the explosion, the queen was suddenly encased in the Legendary Silver Crystal, protecting her. But her four Sailor Senshi and the king were hit head-on and fell unconscious. Chibiusa and Diana were the only ones capable of withstanding the destruction. The king often told Chibiusa stories of the queen's time as Sailor Moon, which would have prompted her to go to the past to seek help. Diana introduces herself as Luna's and Artemis's daughter; much to their surprise.

Tuxedo Mask asks King Endymion as to why he has not aged after all these years. The king replies that the lifespan of the Silver Millennium royal family is a thousand years. The rate of aging halts after adulthood. Serenity was crowned queen at the age of twenty-two during the 21st century and gave birth to Chibiusa around the same time. With the immeasurable power of the Legendary Silver Crystal, she has remained youthful ever since. The power spread around the Earth, and finally, all of humanity had extended longevity. There was peace on Earth until the attack occurred. A black megalith appeared along with the explosion. It lies opposite to the Crystal Palace. The black megalith started siphoning all the energy, creating a space distortion and causing citizens to disappear. The only thing that can save the planet is the Legendary Silver Crystal, but only the queen can use it, and she is unconscious. Sailor Venus realizes that the Black Moon is responsible for the attack and asks the king about them.

King Endymion takes them to a highly advanced computerized room. He shows them an image of the planet Nemesis, a planet of illusionary darkness whose orbit is impossible to calculate. Its existence was unknown for a long time. Centuries ago, a lone criminal from Earth was banished by the queen to Nemesis, and it became a forbidden planet. It was left alone and unchecked for centuries until, in the 30th century, it started giving off massive energy. It was then immediately hijacked by the Black Moon.

Sailor Moon and Tuxedo Mask immediately feel headaches, only to find their bodies turning transparent. King Endymion tells them to go back to the past, as multiples of a single person cannot exist at the same time and space. It is also causing a strain in time; as past and future versions of one single person are quite close to each other.

King Endymion brings up the possibility that Sailor Mercury, Mars, and Jupiter are being held captive in Nemesis. He promises to aid them in their rescue. He tells Chibiusa to protect herself as he is unable to do so. Tuxedo Mask vows to protect Chibiusa, much to Sailor Moon's dismay. As they head to the Space-Time Door, Sailor Venus asks as to why Sailor Pluto's existence was never revealed, despite being a Sailor Senshi like them. The king replies that her mission and destiny is completely different from that of the Inner Senshi. Time is the last domain that should not be violated. Since ancient times, Sailor Pluto alone has been responsible for guarding the door. He requests her to give the Space-Time key, which she obeys. Using the key, the group warp back to the 21st century Tokyo, right into the park where they started the journey. Tuxedo Mask tells Sailor Moon that he would take care of Chibiusa. Sailor Moon is angered by the fact that he seems to choose Chibiusa above everything else, and runs away. At her home, she ponders over the issue, saddened by the fact that he never requested her to protect Chibiusa along with him.

The next morning, Mamoru finds that Chibiusa has gone. She had in fact, gone to Sailor Pluto because she believes she is the only true friend she has. Chibiusa goes to the Crystal Palace, where she watches the unconscious Senshi and the king, and goes to her mother, begging her to open her eyes, feeling helpless and lost.

On planet Nemesis, Prince Demande stands to gaze upon an image of Neo-Queen Serenity. Esmeraude watches him from behind, only to be caught by Rubeus. Embarrassed, Esmeraude requests the prince to give her one more chance, showing him the ability Wiseman has granted her. She undertakes Code Extra - Operation Relax. When Chibiusa leaves the Crystal Palace, she is confronted by Esmeraude, who seems to have gained the ability to elongate her hands. She catches Chibiusa on her neck and lifts her, demanding her to show the power inherited from the queen, and removes one of her earrings to attack her. The rest of the group arrives, and Sailor Venus attacks Esmeraude with Venus Love-Me Chain, breaking her grip on Chibiusa, who is caught by Tuxedo Mask. Esmeraude uses her earring to attack the group. Sailor Moon tries to attack her with Moon Princess Halation but the rod's abilities, again, prove ineffective.

Esmeraude uses multiple hands to grab hold of each of them. King Endymion appears and encourages Mamoru, and both of them attack her with Tuxedo La Smoking Bomber. The combined power eliminates Esmeraude once and for all. Sailor Moon is tensed by the fact that she is the only one who does not seem to have powers when she remembers Chibiusa saying that the Silver Crystal from the past can only be used in the past. Realizing that she comes from the past, she can never use her powers in the future.

Wiseman and Prince Demande appear above them, telling them that he could alter the future even more. Sailor Moon demands the prince to tell why they had done this to the Earth, and where their closest allies were taken. Prince Demande recognizes her eyes to be exactly like those of the Queen's and realizes that she is, in fact, the Queen's past self. He opens his third eye, which renders Sailor Moon weak and immobile. He takes her away, while the others helplessly watch in horror.

Changes From the Original Anime 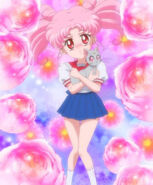 Sailor Moon learns that Chibiusa is her Daughter

Sailor Venus lands on everyone

Usagi cries about everything

Esmeraude with her magic arm

Retrieved from "https://sailormoon.fandom.com/wiki/Act_20_Crystal_Tokyo_-_King_Endymion_-_(episode)?oldid=227161"
Community content is available under CC-BY-SA unless otherwise noted.