To help Chibiusa save the thirtieth-century future, Sailor Moon, Sailor Venus, Tuxedo Mask, Luna and Artemis all must go to the hidden Door of Space-Time that is guarded by Sailor Pluto; the Sailor Senshi of Space-Time, who does not allow any intruders to proceed further.

Chibiusa reveals that she is actually from the future, crossing time and came to the present from Crystal Tokyo in the 30th century. There was an explosion in her city, but nothing else she knows. Artemis brings up the possibility that the Black Moon attacked Crystal Tokyo, and that the captured Guardians could have been taken into the future. Sailor Venus asks Chibiusa whether she could take them to the 30th century. However, Chibiusa recoils, saying that she can never go back to such a scary place.

At Mamoru's home, Chibiusa is put to bed. She tells him that her mother is beautiful and a really strong woman. Usagi, waiting outside the room, questions him on his closeness with Chibiusa, feeling weird that she is becoming jealous of a little girl. Mamoru embraces her. Usagi vows to protect him with everything she has. Mamoru feels the same way, promising to never leave her side. They silently kiss, embracing each other, and fall to the floor.

Meanwhile, at Minako's home, with Minako sleeping, Artemis tries to discuss time warping with Luna, only to find that she is asleep as well. Luna immediately has a vision of her being called by Queen Serenity during the Silver Millenium. The queen finds Luna staring at a magnificent door. She tells her that the door is guarded by a solitary Guardian, and requests her to forget what she had just seen. Luna wakes up, thinking about Chibiusa and the mysterious time key that she has.

The next day, Chibiusa announces that she has made up her mind to go back to the 30th century, taking the rest of them along. As she held the time key upwards, she remembers the words a friend had told her about time travel being a taboo. All of them hold hands with her, and she begins to chant the words needed to activate the time key and go to the future (see trivia). Immediately the clock in front of them winds forward at super speed. However, during their journey into the future, Chibiusa becomes separated from the rest.

In Nemesis, the enemies have sensed that a time warp has been created and people have traveled into the future. Wiseman orders Prince Demande to destroy the Legendary Silver Crystal and its heir, as well as the castle. Esmeraude assures that the prince that she would present him the queen. She summons her subordinates, Chiral and Achiral - the Boule Brothers.

Sailor Moon, Sailor Venus, Tuxedo Mask, Luna, and Artemis are trapped between time dimensions. They see the very same door that Luna saw in her dream when a figure drops down from above, telling them that they shall advance no further. She introduces herself as the controller of the Door of Space and Time, the Guardian of the Underworld, Sailor Pluto. She performs her exceptionally strong Dead Scream attack, wounding all of them. Sailor Moon tries to befriend her, seeing that she is yet another Sailor Guardian. When Sailor Pluto is ready to strike again, Chibiusa comes running, begging her to stop and hugs her. Sailor Pluto reprimands her for stealing the Time Key from her and going back to the past without permission but embraces her for being safe. Chibiusa reveals that she is the princess of Crystal Tokyo.

Sailor Pluto opens the door, and they walk into a gloomy and dark place, Crystal Tokyo of the 30th century. The moon is extremely close to the Earth now, hanging low. They see the decomposing bodies of civilians and a huge black block that seems to enclose the palace. When Chibiusa runs into it, she is seemingly thrown back, but all of them become encased in a structure, where they see the Boule Brothers and realize that it is a trap. Immediately all of them become encased in crystal. Sailor Moon tries to perform Moon Princess Halation but the rod will not activate. Cracks appear all over them. Esmeraude confronts them and taunts Chibiusa into giving her the Legendary Silver Crystal before attacking them with her powers. A figure appears, telling Tuxedo Mask to pray that the crystal floor would break. He does so, destroying the crystal. Venus attacks the brothers with Venus Love-Me Chain, encasing them in her chain while Tuxedo Mask attacks them with Tuxedo La Smoking Bomber, eliminating them once and for all. Esmeraude escapes and the crystal structure around them breaks, revealing the real Crystal Palace.

They enter the palace and find a lovely young woman encased inside a crystalline structure; sleeping very deeply. Chibiusa answers the wondering group that the woman is her mother, Neo-Queen Serenity. Chibiusa spots a little white kitten whom she calls Diana, but the kitten runs into the hands of a young man who bears an extraordinary and undoubtedly resemblance to Mamoru, whom Sailor Moon addresses as Tuxedo Mask. 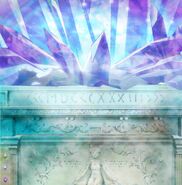 Retrieved from "https://sailormoon.fandom.com/wiki/Act_19_Time_Warp_-_Sailor_Pluto_-_(episode)?oldid=227159"
Community content is available under CC-BY-SA unless otherwise noted.